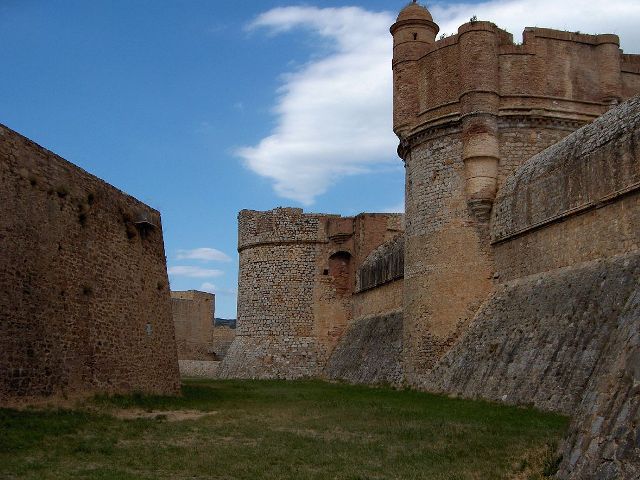 Location: Salses-le-Château, in the Pyrenees-Orientales departement of France (Languedoc-Roussillon Region).
Built: 1497-1504.
Condition: Ruins.
Ownership / Access: State property.
ISMH Reference Number: PA00104129
Notes: Forteresse de Salses is a fortification built between 1497 and 1502 by the Spanish Catholic Kings, Ferdinand II of Aragon and Isabella of Castile. It is located in the municipality of Salses-le-Château, 17 km north of Perpignan, in the Pyrénées-Orientales department. It is part of the sites managed by the National Monuments Centre.In 1496, following the destruction of the village and castle of Salses by the French army, the Catholic Kings, Ferdinand II of Aragon and Isabella of Castile, decided to build the fortress. Built very rapidly between 1497 and 1504 by the commander Ramirez, large artillery King and by the engineer Francisco Ramiro Lopez, the fortress guarded the old border between Catalonia and France, facing the French fortress of Leucate today destroyed. This fortress would have cost 500 kg of gold, 20% of the budget of Castile. While it is still under construction, the fortress suffers and resists a first seat of Louis XII French in 1503. During the siege will be the explosion of the first war of mine that was successful and that will make hundreds victims. It is possible that this episode took place in a barbican which defended a second door to access now disappeared, but there still is the location in the important occasions of masonry of the north curtain wall. Abandoning this bastion detached they felt lost, the Spaniards would have folded in the fort, having trapped the Barbican with powder charges. According to some chronicles of the time, 600 French soldiers were killed or wounded in the blast. It was after this unsuccessful and murderous siege which the Spaniards have undertaken the construction of the thick masonry slope (which is also called "fruit") that dresses outside the base of the curtain and towers. shooting positions (small gunboats and doorways with muskets) which pierced the curtains in the lower part to defend the ditch were on this occasion walled by the slope and the peripheral corridor, from the cellars of the fortress served these shooting positions , was transformed into listening and gallery-against mine. In 1538, the fortress is visited by Charles Quint. In 1544, the peace signed between Charles V and François 1er brings a century of peace. It is then that the fortress begins to gradually lose the military superiority that its innovative architecture had given him because in the meantime, in northern Italy, was born a new form of fortification even better suited to withstand artillery: the bastion plane.It is used to turn state prison tower including those responsible for the Case of Poisons (1682-1683) under Louis XIV, then tinderbox throughout the nineteenth century. Briefly from 1793 to 1804 the fortress is home to a new garrison. In 1817, the tower is converted into powder magazine. The fortress of Salses is a listed building in 1886.

How To Get To Forteresse de Salses (Map):