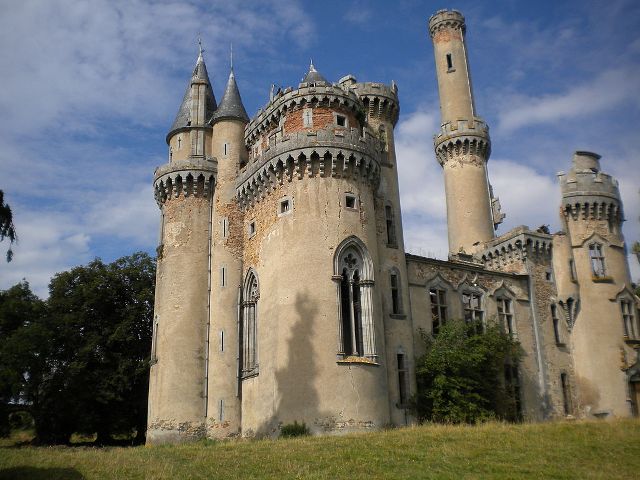 Location: Saint-Bonnet-de-Bellac, in the Haute-Vienne departement of France (Limousin Region).
Built: 19th century.
Condition: In good condition.
Ownership / Access: Privately owned.
ISMH Reference Number: PA00100440
Notes: Château de Bagnac is a castle located in the municipality of Saint-Bonnet-de-Bellac in the Haute-Vienne. This monument is the subject of a registration as a historic monument since May 16, 1975.The present castle was built by the Marquis (Antony 1826-1892) and the Marquise de Saint-Martin Bagnac (legitimists fervent royalists) on the site of the former castle of the fifteenth century destroyed during the religious wars (in this Castle Stone Bagnac born in 1330, great Cardinal who was celebrated in Rome). The only part of the castle dates from the fourteenth century is the big corner tower, topped by a roof very steep during the reconstruction of the castle.Note that this castle was rebuilt entirely, from the Marquis and Marchioness had only intended to restore it. However in 1875 after what appeared to be a restoration turned into a reconstruction. The construction lasted 25 years and Bagnac swallowed huge sums of money in this project. Work on the castle began in 1858; interrupted during the 1870 war, they resumed in 1875. All plans, drawings of woodwork, ironwork, stone carvings were made by the Marquis and Marquise in person on plans inspired by Viollet-le-Duc but not drawn personally by the architect. The castle is Neo-Gothic style. This building was built to reaffirm an identity, the presence of a glorious past undermined by the Revolution pass. Spouses knowing they would have no children, had decided to leave the castle to Count de Chambord pretender to the throne of France. It died too soon, the castle fell to Salvaing Baron Guy de Boissieu. In 1911 a Laugaudin commander mentions as a residence in an almanac of the time. It is actually the tenant of Baron de Boissieu, heir to the castle after the death of the Marquise de Elise Preaulx Bagnac in 1902.Inside, one can see two beautiful fireplaces built from miniature terracotta made by the Marquise in 1880.

How To Get To Château de Bagnac (Map):