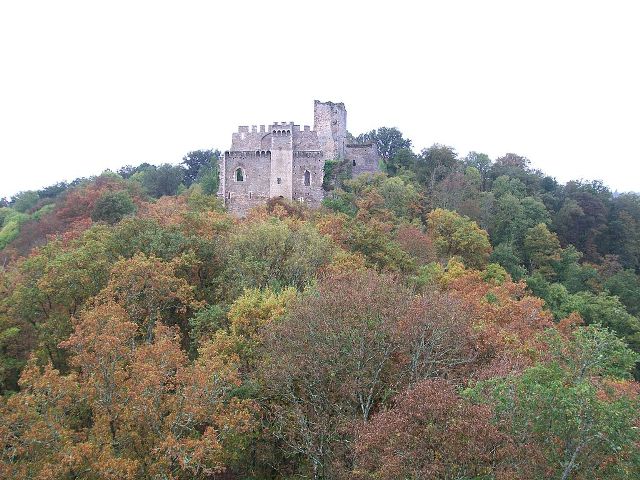 Location: Saint-Jean-Ligoure, in the Haute-Vienne departement of France (Limousin Region).
Built: 12th century.
Condition: Ruins.
Ownership / Access: Conseil général de la Haute-Vienne.
Notes: Château de Chalucet (or Chalusset), overlooking the confluence of the Briance and Ligoure is located in Saint-Jean-Ligoure about 10 km south of Limoges in Haute-Vienne. The General Council of Haute-Vienne, owner since 1996 of this fortress historic monument and the Forest Park area surrounding Ligoure, launched a comprehensive backup program and development of the site, in order to into a cultural and tourist attraction.able to challenge for the local lords, in the domain of the Abbey of Solignac, it was primarily the symbol of lordly power for those (bishops or viscounts of Limoges mainly) who competed in the use and control. At the end of the thirteenth century, Geraud de Maulmont, advising Limoges viscountesses Marguerite and Marie and the King of France, already builder of Châlus Maulmont, transformed the fortress founded by Bernard Jaunhac on behalf of the abbot of Solignac in a vast fortified palace.Chalucet became the largest fortified castle in Limousin. Ironically, his defensive role, primarily deterrent until the fifteenth century, was fully utilized during the Hundred Years War by gangs of looters who roamed the country.Chalucet castle ruins were classified Historic Monument List in 1875.

How To Get To Château de Chalucet (Map):