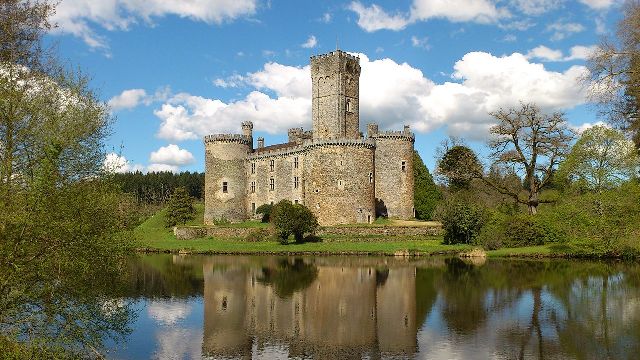 Location: Dournazac, in the Haute-Vienne departement of France (Limousin Region).
Built: 12th century.
Condition: In good condition.
Ownership / Access: Privately owned.
ISMH Reference Number: PA00100299
Notes: Château de Montbrun is a castle of the twelfth and fifteenth centuries, located on the town of Dournazac in Haute-Vienne.The site was occupied from the eleventh century, as evidenced by the high castle mound in the immediate vicinity of the present castle.In 1199, the Lord of Montbrun, Pierre Brun, head of the knight Pierre Basile garrison during the siege of Chalus in which Richard the Lionheart found mort.Au the twelfth century, a stone castle, which remains the style of dungeon novel is built. This castle was burned and almost entirely rebuilt in the fifteenth century. Looted and pillaged during the Revolution, it was restored in the nineteenth century. He suffered another fire in 1917 and then fully restored.Since the late twentieth century, the castle was completely restored and inhabited by Mr. Maarten Joost Lamers, a native of the Netherlands.Inside the castle is registered as a historic monument since September 20, 1946 while the outer and the plot are classified 10 April 1990.Although ideal model of the castle, Montbrun has many features that make it above all a pleasure palace. The castle retains a high tower in the fourteenth century novel that was highly mâchicoulis, and the home of the fifteenth century with towers in its four corners is pierced with large mullioned windows little easier to defend.Castle Montbrun remains one of the flagship sites of the community of common Chalus Mountains and Périgord Limousin regional park. It is one of four sites of the Limousin represented in miniature park France, near Paris.

How To Get To Château de Montbrun (Map):