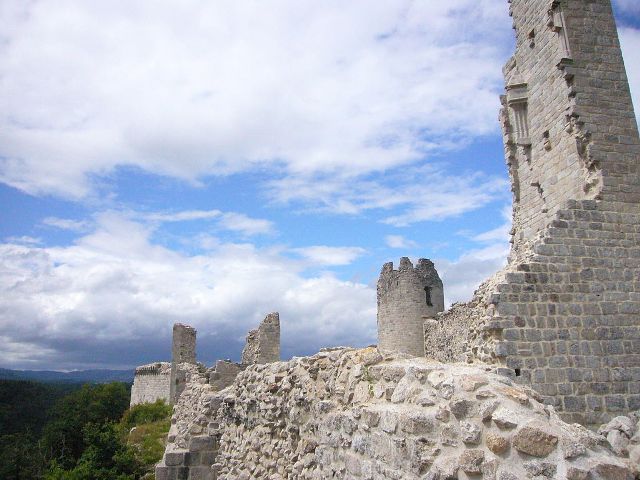 Location: Moustier-Ventadour, in the Corrèze departement of France (Limousin Region).
Built: 11th century
Condition: In good condition.
Ownership / Access: Privately owned.
ISMH Reference Number: PA00099811
Notes: Château de Ventadour is a medieval castle in the town of Moustier-Ventadour in Corrèze.Il the subject of a registration as historical monuments by the 1840 list.The castle built in the eleventh century, probably redesigned in several construction and reconstruction campaigns ranging mostly from the twelfth century, commanded the Viscount of Ventadour whose capitals were Égletons, Ussel and Meymac. Its location and its formidable defense, the castle seemed impregnable. However, he was taken by treachery and thirteen years he remained in the hands of Geoffroy Tête Noire during the Hundred Years War. In the Renaissance, the counts abandoned the fortress, too austere, and settled in Ussel in an elegant hotel. Ebles II "Lo Cantador" Viscount of Ventadour, lived in the castle and the troubadour Bernard de Ventadour was born there. Of Viscount until 1350, it was transformed into County by Philippe de Valois, then Duchy-Peerage in 1578. It belonged thus successively to the "first race" of Ventadour, from the line of Comborn until 1472 wedding date of the last heiress with Louis de Lévis, baron Voulte. After the Lévis-Ventadour, the stronghold fell, even by marriage to Rohan; and Rohan Soubises-Ventadour, went to Conde, who lost interest. Sold as national property, the castle became the prey of the demolition, especially when it was acquired at the Restoration by Pertuis name materials merchant Gay for the sum of 16,000 francs. It was then the property of the Duke de Levis-Mirepoix who ceded in 1988 to the town of Moustier-Ventadour for one symbolic franc to the obligation to develop it to enable guided and free visits within it.Classified site registered in 1946, the already strong gradient of the site required major work backup. It was not until 1965 that were undertaken at a time of consolidation and some works of excavation to try to reconstruct the extent of the fortress of old. Excavations continued until the 1980s helped define the contours of a number of rooms inside the enclosure and to bring to light several important sets of stately home. excavation campaigns were conducted in 2003 (northeast curtain), in 2004 and 2005 (Barbican tower) with consolidations. Today the site is open to the public during the summer season (from mid-June to mid-September) with guided tours every hour. New excavations are ongoing reflection in the coming years.

How To Get To Château de Ventadour (Map):