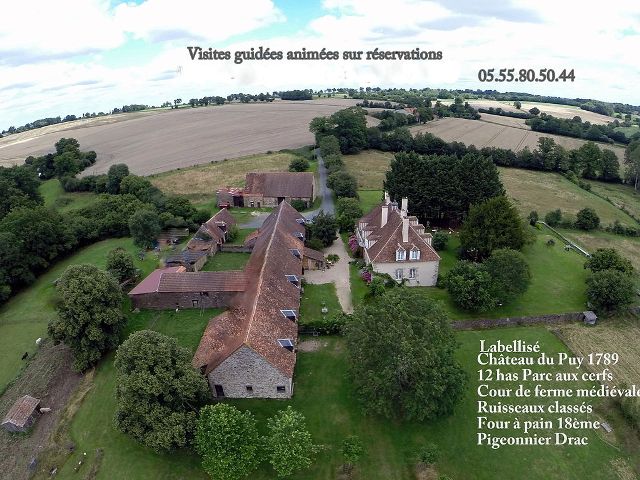 Location: Tercillat, in the Creuse departement of France (Limousin Region).
Built: 18th century.
Condition: In good condition.
Ownership / Access: --
Notes: Château du Puy is a French castle of the eighteenth century built in the municipality of Tercillat in the Creuse.This house of gentry, to gates of the eighteenth century, and restored parquet floors, was built with the stones - limestone buildings commonly used in the Middle Ages - the ancient castle of Tercillat, himself a former Templar Commandery, instead of the church, destroyed during the Revolution. Land and chezal du Puy, the Podio in Latin, are mentioned in 1237 in the archives of Mr. Villaines on Latin on parchment dated May 4, 1237. Ajasson Gilles, who was the lord, sold them to Roger Brosse, Lord of St. Severus, who donated it to the Groind Jehan in the late fourteenth century, and himself sold them to Peter Guionnet. In 1395, Pierre II Brush ratified the sale so made, Saturday, January 24 after the feast of St. Anthony. We find the stronghold of Puy hands Maiden Margaret, wife of Loys de la Vigne, Maransagnes lord in 1509. Le Puy was gathered to the Lordship of Tercillat - which was a city in medieval times - by John Noblet. Then the feud passed to Sylvie Claire Lady Chapel, Claude woman from Vaussadade, Lord of Brousse. Proxy his farmer John Baptist Porcher made in honor of Flexelles Germain, Sainte-Severe lord.Some months later, Claude Vachassade sold it to Claude Bertrand Beaumont Tercillat lord who himself paid homage in 1750; La Seigneurie du Puy, large square house a kilometer northwest of Tercillat, followed since the destinies of earth Tercillat and ran with them in 1816 in the family of Beaufranchet and their descendants, the Barons Wildemberg1. Tercillac, land of Puy, the farms of the Pontet and Wood Huguet were one of the oldest and most important strongholds of Sainte-Severe Lords and the Abbey of Déols Indre near Châteauroux2; they became creusoises the Revolution. Agnès de Noblet in 1736 provides a detailed confession of the fief du Puy, at the time of reunification of Jean Noblet, and described as a "stately home (...) in two main buildings enclosed in a courtyard at the entrance of which was a portal and a iceluy Collombier ". The castle of Puy, inhabited in 1816 by Claude Amable Beaufranchet (future owner of the castle Moisse Creuse) adjoining the monastic abbey town Prébenoît Bétête, acquired Wildemberg Bernard Baron in 1976 with Maître Louis, notary at St. severe Charles Rousseaux, and dependencies - twelve hectares of forest, classified streams, ponds, hills, natural stone quarry, deer park, farm, medieval farm yard, bread oven, medieval dovecote listed by the Drac Limoges garden, masonry stove in the eighteenth century to the office, revolutionary clock, fold with tools of old, vaulted cellars, ponds - is restored and staged by five grandchildren of Countess Maussion Cande.

How To Get To Château du Puy (Map):