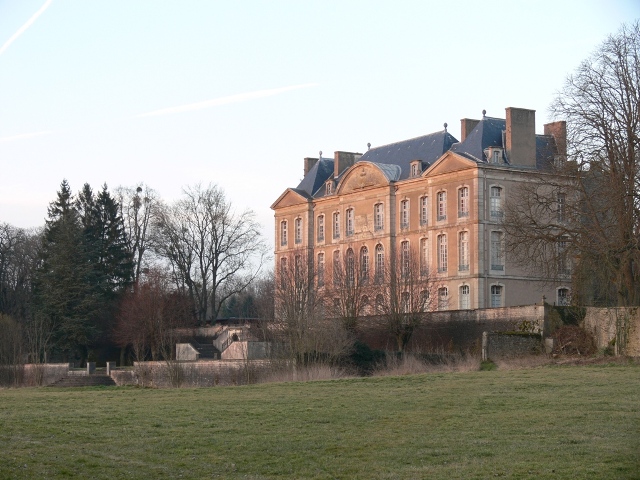 Location: Aulnois-sur-Seille, in the Moselle departement of France (Lorraine Region).
Built: 14th century.
Condition: In good condition.
Ownership / Access: Privately owned.
ISMH Reference Number: PA00106726
Notes: Château d'Aulnois date of the eighteenth century and overlooks the Seille, in the heart of the village of Aulnois-sur-Seille. It is the subject of a classification as historical monuments since May 1963 and a registration in September 2013.Initially, this dependence of the Metz diocese was a medieval stronghold. It is found at the back of the castle, the towers of the fourteenth and fifteenth centuries integrated into the castle rebuilt in the classical style.The task of rebuilding the castle in the eighteenth century, the architect Boffrand decides to use the natural terrace on the Seille that constitutes the site. The facade is designed in 1726. On that date the count of Armoises governor ducal children and owner of the castle, is created "Marquis Aunoy" by Duke Leopold, Duke of Lorraine. Subsequently, the castle is undergoing major damage during the First World War but will gradually rebuilt from 1920 and historical monument in 1926. In 1934, the Marist brothers bought the castle and installed a school and a boarding school. During World War II, it was occupied by the Hitler Youth and suffered further damage during the fighting of the Liberation. From 1946 to 1979, various campaigns work partially restore the castle was then abandoned. In 1993, the SIVOM between Seille and Nied castle gate to rehabilitate the buyer, with the support of Europe, the State and the General Council of Moselle (cost of rehabilitation: € 2,686,000). In 1999 came the first school year in the castle whose owner and manager is SIVU the Seille valley of nine rural communes. It now houses a public elementary school, called the school Armoises, more than 150 students and an association (rural home of Armoises) that manages the after-school and canteen on site and it offers numerous cultural and sports activities as well as various events.