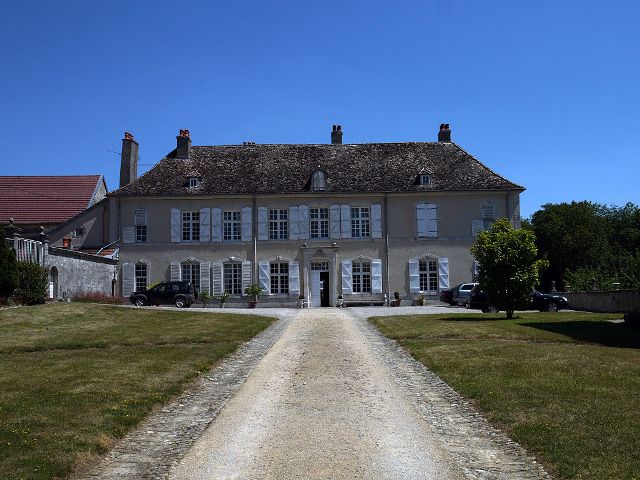 Location: Autigny-la-Tour, in the Vosges departement of France (Lorraine Region).
Built: 1600-1748.
Condition: In good condition.
Ownership / Access: --
Notes: Château d'Autigny is a castle of the town of Autigny-la-Tour in the Vosges department in Lorraine. Castle Autigny is located at the entrance of the village, built in a circus dug by the Vair. The original fortified house, Count Gondrecourt only keeps the renaissance portal and the two towers that frame the current courtyard. The property consists of a wall of enclosure assembly comprising the present castle L-shaped and semicircle in common with the paved courtyard of the west of the main building and the east terrace. The two perpendicular wings of Louis XV style château replace harsh home of Mauleon. Private property, the castle visit some afternoon of spring and summer. After crossing the carved front door of rock, one enters a hall which hosts a monumental staircase made of stones and decorated with a wrought iron railing. South of the castle walls and slaying a double revolution staircase dominate a two-hectare park. The staircase is enriched by an elegant wrought iron railing of the eighteenth century and two fire pots Louis XV style, overlooking a nymphaeum like Castle Gerbéviller the park. Facing the stairs, massive topiary of centennial houses a statue of the nymph Erignie holding in his hands the traditional boar's head. Also in the garden an old icebox, a factory and a water feature designed in the spirit of Canopus of Hadrian's Villa in Tivoli fed by a canal. The entire garden is included in the inventory of historical monuments December 12, 1991.

How To Get To Château d'Autigny (Map):