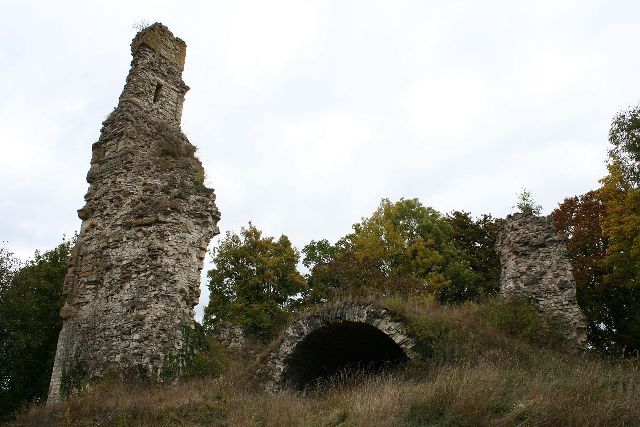 Location: Bainville-aux-Miroirs, in the Meurthe-et-Moselle departement of France (Lorraine Region).
Built: 13th-14th century.
Condition: Ruins.
Ownership / Access: Unknown.
Notes: Château de Bainville-aux-Miroirs is a medieval castle located in Bainville-aux-Miroirs, in the present Meurthe-et-Moselle department. The castle, built near a Romanesque church and a priory which it earlier, is away from the present village of Bainville-aux-Miroirs. It occupies the northern part of a rocky outcrop overlooking the Moselle nearby thirty meters, this promotes both the defense and the observation of surroundings. The castle is now in ruins. The base of the tower which had a significant material removal was confirmed by recent studies. Remain essentially a retaining wall wearing a curtain wall and the remains of an imposing tower, in particular, a stone needle of 26 meters. You can see, a few meters from the summit, the birth of a ribbed belonging to a room on the third floor. A vast vaulted room is visible and part of the entrance to the dungeon defense system: the front door followed by a portcullis protected by a stunner whose chimney is still several meters high. Harrow then gives a room of small dimensions, a hallway, the walls are pierced with three raised doors. The area around the ruined tower is dangerous and the risk of falling of existing stones, the site is closed to the public (safety zone). The site is protected as a listed site.