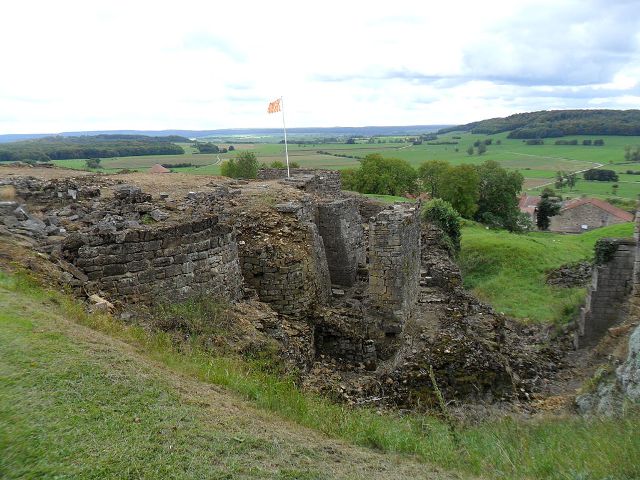 Location: Beaufremont, in the Vosges departement of France (Lorraine Region).
Built: 13th-15th century.
Condition: In good condition.
Ownership / Access: Owned by a private company.
ISMH Reference Number: PA00107091
Notes: Château de Beaufremont is a castle in the municipality of Beaufremont west of Vosges in the Lorraine region, which there are only remnants. Beaufremont Castle is a castle of the twelfth century, owned by the family of Bauffremont. It is mentioned for the first time in 1157, but has undergone several successive transformations over the centuries: curtains rebuilt in the thirteenth, fourteenth and fifteenth centuries (the remains to the north are the oldest). The stately, called "maysonnement nine", was rebuilt in the late fifteenth century or early sixteenth century, presumably to Claude d'Arberg. The loft, located outside the walls, was built in 1607 (when supported by a headband). The castle was dismantled in 1634 (dating historical works) during the Thirty Years War. A body angled to return the stately home was built in the early nineteenth century, along with the dependencies of the lower court (also now in ruins). A body in the extension of the stately home was built in the twentieth century. The loft is turned into St. Joseph Chapel.

How To Get To Château de Beaufremont (Map):