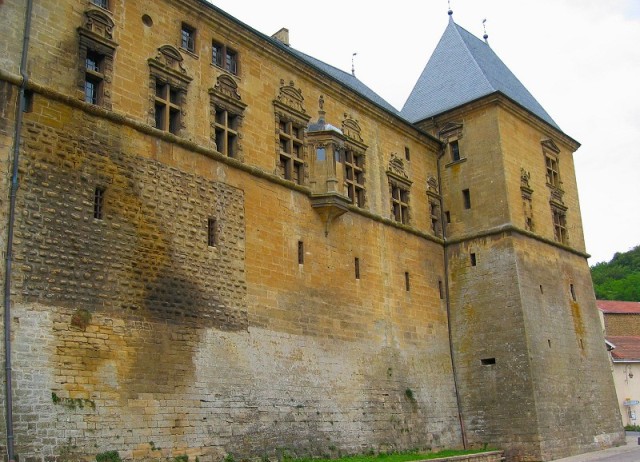 Location: Cons-la-Grandville, in the Meurthe-et-Moselle departement of France (Lorraine Region).
Built: 16th-18th century.
Condition: In good condition.
Ownership / Access: Privately owned.
ISMH Reference Number: PA00106015
Notes: Château de Cons-la-Grandville is a castle in France situated in the village of Cons-la-Grandville in Meurthe-et-Moselle. Remains from the seventeenth century the Marquis of Lambertye, Castle of Cons-la-Grandville alone represents an architectural synthesis of the Romanesque period to the classical period.The present castle was built on the remains of a medieval castle built by Dudo of Cons, Godfrey crusade companion of Bouillon on a rocky promontory surrounded the village and wooded hills. It keeps to medieval times, foundations and bass parties, massive and fortified (north and east). The set is rebuilt stone Jaumont from the Renaissance The upper parts are pierced by large windows, richly decorated and topped by high roofs slate. The interior is also marked by this style with coffered ceilings, fireplaces (like the room decorated to honor reliefs representing the loves of Pyramus and Thisbe) ... This is Martin de Custine ( Lord of Cons-La-Grandville) that has these facilities. The courtyard is itself widely classic U-organization buildings almost single-storey, central pediment marked arms of the family etc. receptions parts like the large dining room, are also marked by the style of the eighteenth century. These successive improvements over the centuries due to conflicts that affected the region (medieval wars First Thirty Years War and the two world wars (which damaged the stables particular). The ensemble is completed with a south barn (built in the eighteenth century) with a magnificent oak beams. The Benedictine priory built by Cons Dudo is rebuilt from 1760 by the architect Laurent-Benoît Dewez. The vaults of the crypt of the priory are adorned with Gothic frescoes from the fourteenth century. The park is reorganized in the nineteenth century in the English style and you can admire numerous ancient trees. Open to the public, the castle and its outbuildings have been restored since 1984.

How To Get To Château de Cons-la-Grandville (Map):