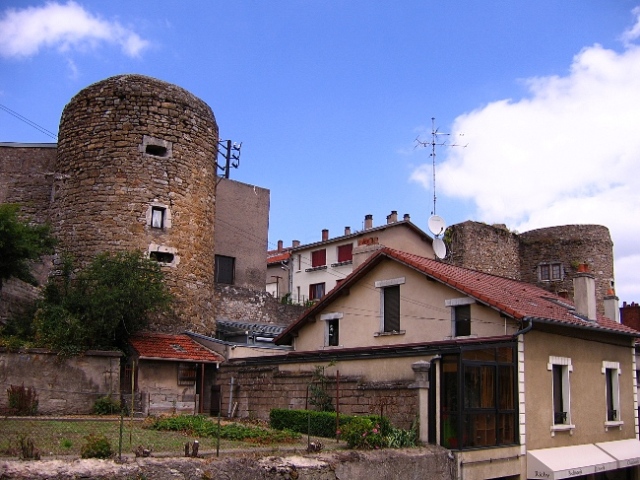 Location: Dieulouard, in the Meurthe-et-Moselle departement of France (Lorraine Region).
Built: 11th-16th century.
Condition: In good condition.
Ownership / Access: Owned by the town.
ISMH Reference Number: PA00106022
Notes: Château de Dieulouard in the Middle Ages by Lorraine patois "Lou Wart Deus" (God bless him) - is a castle built in the late tenth century in Dieulouard, near Pont-à-Mousson, in the current department Meurthe-et-Moselle.Il the subject of a registration as a historic monument since June 19, 1927.The Castle of Dieulouard - originally a simple fortified house - is the heir to the Gallo-Roman city of Scarpone, where the great Roman road of Lugdunum (Lyon) in Augusta Treverorum (Trier) by Divodurum (Metz) crossed the Moselle. The Roman historian Ammianus speaks of Scarpone and tells us that the Roman consul Jovin won there in 366 victory over the Alemanni came skimming the region. It was around this same time (late fourth century) was built outside the city a castrum which only survived after the destruction of Scarpone Attila during the barbarian invasions of the fifth century. Dieulouard Castle was built in 997 by the Bishop of Metz, Adalberon II, bishop of Verdun before their attackers to protect the inhabitants of a new village established near the ruins of Scarpone. It then passed into the time of the bishop of Verdun, Heimon. In 1028, the letters patent of the Emperor Conrad II granted to the foundation of Gellamont Priory, near the Castle of Dieulouard, speak of the "Castrum quod dicitur Deus Louvart in pago Scarponensi in comitatu Richiani". This is the first authentic document kept on the castle. In the twelfth century, the bourgeois of Toul lost a considerable battle against Count Vaudémont; Castle Dieulouard was taken twice by Metz, who razed it. Rebuilt the fortress still had to undergo, over time, many seats by Metz, Charles the Bold and by the Huguenots. Century after century destroyed and rebuilt, burned and restored the castle became the fourteenth century an imposing fortress, sheltered behind a facade straight 100 meters long tour to the East, with a large polygonal enclosure semicircular dating from the tenth century with seven circular towers and a square tower to the west, crenellated walls, a fortified gate preceded by a drawbridge and a stone bridge with four arches. The set, which was remodeled in the sixteenth century is nested in the middle of houses built in its high walls 20 meters. Dieulouard was at that time the seat of Verdun provost of seven villages, land évéchoise down like a wedge into the duchy of Lorraine, observation post of bishop of the Moselle Valley and its river trade control, then flourishing. In 1660, Castle of Dieulouard was clipped and rendered harmless. During the Revolution, it was sold as national property, divided into lots for housing a dozen families who pierced aménagèrent new windows and gardens. It took until 1970 for the beginning of rehabilitation is undertaken with the restoration of the episcopal house and the creation of a Gallo-Roman Museum. Housed in the castle, the Friends of the Museum of the Old Country in Dieulouard presents objects from the ancient city of Scarpone as well as collections of sixteenth and seventeenth centuries as weapons of last three wars.