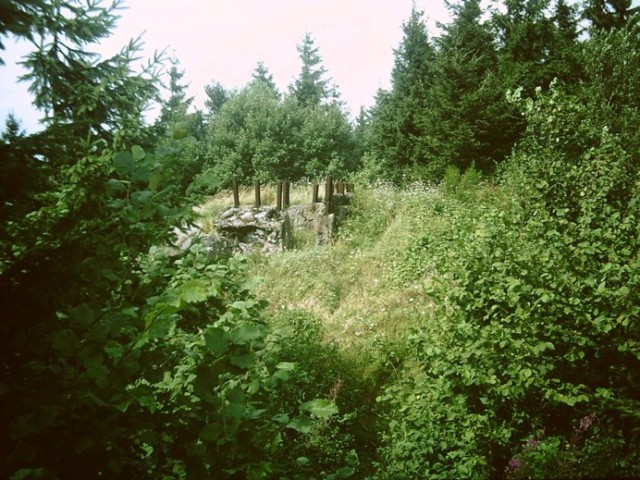 Location: Wisembach, in the Vosges departement of France (Lorraine Region).
Built: 14th century.
Condition: Ruins.
Ownership / Access: --
Notes: Château de Faîte is a castle in ruins located in the French town of Wisembach in the Vosges department. If today the site is overgrown with brambles and nettles makes its haphazard visit the remains of the Castle Ridge testify to a history of some 600 years. Built by order of the Duke Thiébaud II of Lorraine in 1306, the castle is named Châtel-sur-Ridge. Its function is to ensure the safety of the ducal silver mines of La Croix-aux-Mines and support another ducal castle, the High Échery part that protects the Lorraine mines Sainte-Marie-aux-Mines . It controls the neck of St. Mary, the lord is responsible for collecting tolls there. In 1674, the Duke of Lorraine Charles IV exiled following the invasion by the French troops took refuge in Franche-Comté. On December 12, he seizes the castle occupied by the French and it subtracts. Count Bourlémont under the command of Turenne attempts to dislodge, without success. Charles IV is victorious and an impressive number of prisoners. Unfortunately, this victory will not allow him to regain his throne. It was not until the advent of Duke Leopold for Lorraine provisionally found independence. During the Revolution, the place is in ruins. Sold as national property, it was bought by a resident of Wisembach and operated as a quarry. In 1914, the French occupied the castle they transform into bunker. Changing several times occupant, the site suffers fighting. On 19 June 1940, the 230th regiment fortification reoccupied the square, is dislodged by the Germans, who remain four years, before being driven out by the US 142nd RI.