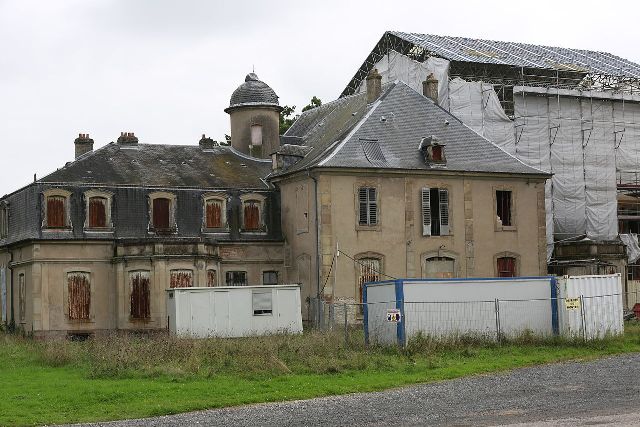 Location: Lunéville, in the Meurthe-et-Moselle departement of France (Lorraine Region).
Built: 1730-1734.
Condition: In good condition.
Ownership / Access: Private property.
ISMH Reference Number: PA00106080
Notes: Château de la Favorite (or Château Petit Prince Charles) is a castle in the town of Luneville in eastern Meurthe-et-Moselle department, built by Prince Charles Alexander of Lorraine. It is located 3 rue Voltaire few meters southeast of the castle of Luneville.It's the Duke Leopold I of Lorraine asked that the construction of this small castle to his youngest son Charles Alexander (1712-1780). Work began after the death of Leopold I in 1730 and end in 1734, on plans by architect Germain Boffrand and under the leadership of Jean Marchal. Charles Alexander went into exile in Vienna when the dukedom passes under the couoe of France in 1736, but if he does not live in Lorraine, he maintains his castle and retains full ownership until his death in 1780. Notwithstanding Stanislas Leszczynski, Duke of Lorraine from 1737 to 1766, sometimes used temporarily to house some of his favorites. In 1780 the castle passed by inheritance to the Emperor Joseph II who offers it for sale. It is then bought by a notable of the Court. Following the successive owners of the nineteenth century is uncertain. What is certain is that the castle is doubled at this time with a new city side front (west side) and a redevelopment of the attic. The garden facade (east side) is not affected. The town of Luneville becomes owner of the castle during the twentieth century and sold it in 1999. He was then in good condition. It had been partially registered historic monument September 13, 1984 and fully 14 December 1992.1 But since the beginning of the twenty-first century, the castle is not getting worse, it is now close to ruin and the garden has completely disappeared . September 21, 2011, it is classified entirely as historical monuments.