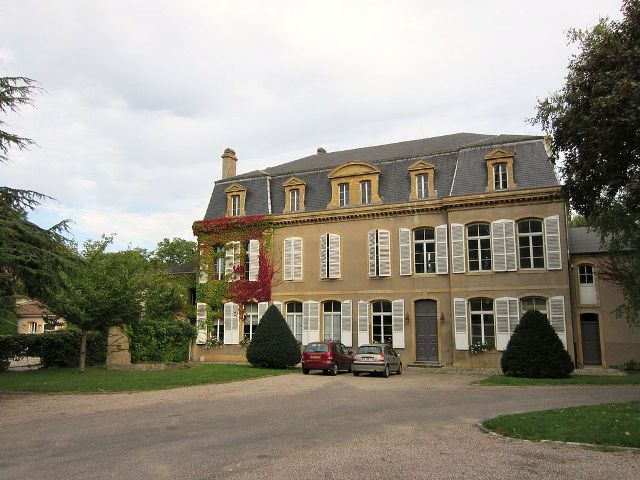 Location: Marly, in the Moselle departement of France (Lorraine Region).
Built: 1187.
Condition: In good condition.
Ownership / Access: --
Notes: Château de La Grange-aux-Ormes is a former lord of the country messin. The first castle was built in 1187 by the monks of Notre-Dame-des-Champs and Saint-Symphorien in Metz. The Counts of Bar sell for 300 denarii which Mr Collignon, in 1322, recognizes vassal of the Count of Bar. In 1404, the family Vry buys and sells in 1409 the chapter of the cathedral of Metz. It then passes into the hands of the family of Apremont which gives the pledge to Metz aristocrats in 1436, the de Gournay and it signals the arrival of a woman claiming to be Joan, May 20, 1436. In 1500 it is sold to Chauvrain then in 1586, Claude Apremont sold the castle to Gronnaix and purchasers succeed: Jehan Travald; the chapter of the cathedral until 1611; in 1614, Jacques Loys, lawyer at the Parliament of Paris; in 1661, Count Cherisey; in 1709, Mr. Le Goullon selling the Bishop Coislin, bishop of Metz to do his episcopal palace. St. Helier family bought it in 1728 and the parish priest of Chandellier Marly says July 22, 1768 "the chapel of La Grange-aux-Ormes of our parish is in good condition and decently decorated to celebrate the Holy Mass." In 1785, it is the property of the counts of Ourches then by inheritance, viscounts of Nettancourt. The castle will come later in the famous family of Clermont-Tonnerre. The Duchesse puts at the disposal of the Minor Seminary of Montigny-lès-Metz. Sold in 1923 to Bogenez Hyacinthe, the latter set up his farm and that until 1963: potatoes, peas, wheat, rye, barley, beets, eggs, milk, cattle and horse sale. Since a pen is for deer. The adjacent wood was transformed in the 1960s into residential subdivision by building several closed (Clos de La Grange-aux-Ormes in 1972 Clos des Lilas then in 1980, Clos des Acacias). The park at the rear of the castle houses a golf since 1991, led by Pierre Bogenez. The outbuildings have been converted into the clubhouse and restaurant.

How To Get To Château de La Grange-aux-Ormes (Map):