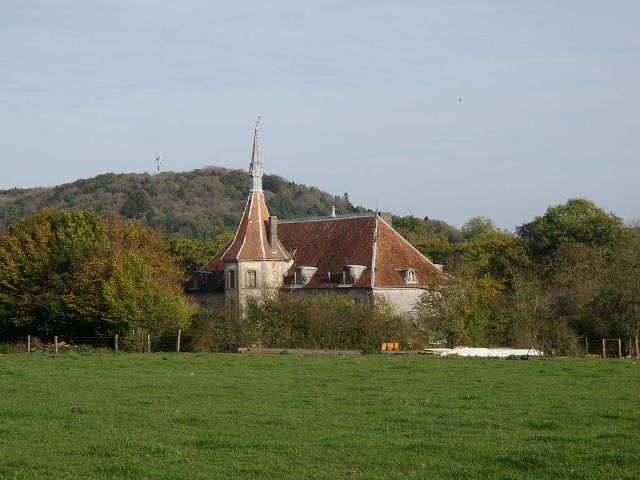 Location: Lamarche, in the Vosges departement of France (Lorraine Region).
Built: 18th century.
Condition: In good condition.
Ownership / Access: Privately owned.
Notes: Château de la Trinité is a castle of the town of Lamarche in western Vosges department in Lorraine. The castle is currently subject to any registration or classification as historical monuments. It is now in a farm (GAEC Trinitarian created in 2007 by Nicolas Bernard & François6). The architectural complex is deteriorating a little more each day, the common and the small chapel of the park is already in ruins. The original convent of the eighteenth century, there remains only the south wing, surrounded by a large park that crosses the Rupt of Corres. Access to the castle by the south-east façade, turning his back on the old national road 429 (Rue Faubourg de France). A wall of which only a few vestiges originally surrounded the park. Facing the street to the Genivette, one enters the property through an entrance gate that has lost its grid with a former host house on the left. The driveway leading to the castle is still lined with trees. From both sides of the castle are common forming an architectural complex in U. The distribution of the openings of the main façade and the presence of skylights carved in the roof, reflect the classic taste and wealth of the order Trinitarian dominates the spiritual life of Lamarche until the French Revolution. In the nineteenth century, a turret is attached to the opposite facade, northwest side, to house a staircase; and a small chapel was built north of the park near the old national road. Inside, the dining hall was decorated with carved woodwork by Gerdolle in 1746 that Maurice Barres had bought in the early twentieth century to his birthplace of Charmes.