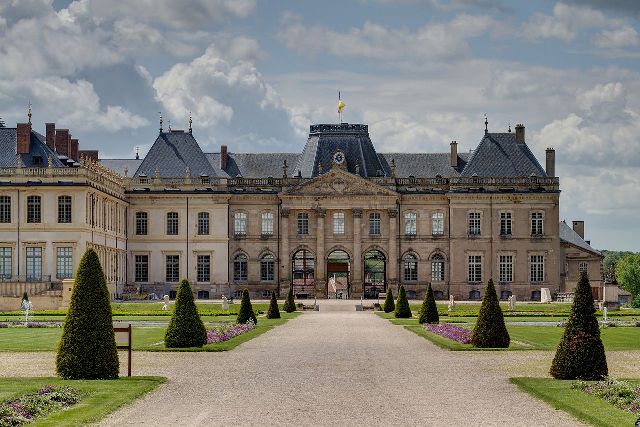 Location: Lunéville, in the Meurthe-et-Moselle departement of France (Lorraine Region).
Built: 18th century.
Condition: In good condition.
Ownership / Access: State property.
ISMH Reference Number: PA00106079
Notes: Château de Lunéville possession of the dukes of Lorraine since the thirteenth century, was built on behalf of the Duke Leopold I between 1703 and 1720 on plans Bourdict Pierre, Nicolas Germain and Dorbay Boffrand. Leopold I, born in exile during the French occupation, only took possession of his duchies with the signing of the Treaty of Rijswijk (1697). He discovered Nancy's capital and its palace dating from the Middle Ages in poor condition and the renovation of which far exceeded its financial capacity. In addition, it took only a few years for war ignites again Europe resulting in yet another military occupation of the duchies by the French army (but this time peaceful). Proudly and not without panache Duke retired in Luneville which he completely rebuilt the castle while drawing as was the fashion of the time of Versailles. He made his principal residence and died there in 1729. His son, the Duke Francis III, was soon forced to give his life as possessions to the King of Poland, King in exile but had the advantage of being the father of the King of France. The heretofore Polish king, Stanislas Leszczynski, also took possession of Luneville he made to redevelop its taste. He died accidentally in February 1766. The duchy and Luneville were then annexed by France. Castles Lorraine fell due to King Louis XV of France who did not know what to do. Many were destroyed. Luneville survived but was converted into barracks. The princely apartments still belong today to the Department of Defense, and the rest of the building in the General Council of Meurthe-et-Moselle. Masterpiece of architecture of the eighteenth century, the "Versailles of Lorraine" was a historical monument in 1901. During its history, the castle has been the victim of several fires, the last in January 2003 sparked a major mobilization movement for its reconstruction.