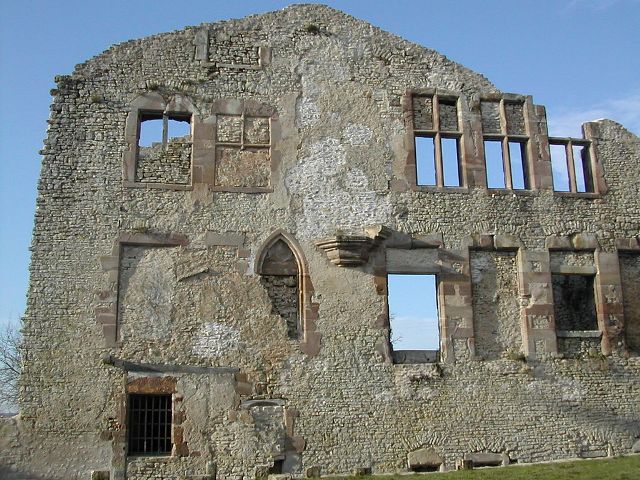 Location: Moyen, in the Meurthe-et-Moselle departement of France (Lorraine Region).
Built: 1444.
Condition: Ruins.
Ownership / Access: Owned by the municipality.
ISMH Reference Number: PA00106098
Notes: Château de Moyen is located in the town of Moyen (Meurthe-et-Moselle).Who in the castle grumbling is a castle that has undergone many transformations until today. It is thought that a fortified settlement already existed in Roman times as the name of the place (Medium Castrum) suggests. During the early Middle Ages (twelfth century), Middle of the name appears in numerous documents as a fortified place. The thirteenth to the fifteenth centuries, becoming a major Middle chatellery which includes the surrounding communities and that depends on the bishops of Metz. In the middle of the fifteenth century (1444), the bishop of Metz (Conrad Bayer Boppart) shaves the old castle to build a mighty fortress. It is in this reconstruction that we have the castle in the state we know today. Suitable for artillery, it presents own characteristics for the use of guns and other culverins which then make their appearance on the stage of armament. The Revolution (1789) will finish the work of Richelieu who in 1639 had dismantled the castle (see engraving François Collignon below cons) In 1983, a local association decided to tackle the development of the site. Many restoration projects are then implemented every year.