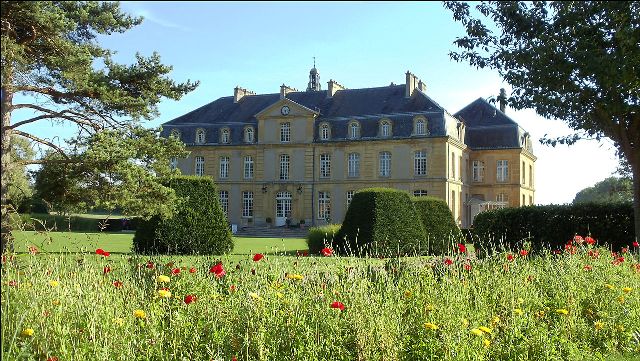 Location: Pange, in the Moselle departement of France (Lorraine Region).
Built: 18th century.
Condition: In good condition.
Ownership / Access: Privately owned.
ISMH Reference Number: PA00106932
Notes: Château de Pange is an eighteenth century mansion on the banks of the waters of the French Nied, in Pange in the French department of Moselle. Typical of classicism, it has a central main building with a triangular pediment flanked by two pavilions flanking the facade on the Nied. A small church from the mid-nineteenth century and has several adjoining the ancient windows of interest.The present castle was built in 1720 for Jean-Baptiste-Louis Thomas after the plans of the architect Jean-Baptiste Louis on the site of ancient medieval fortresses on fire in 1404 and 1704. His ancestor Pierre Thomas, Chancellor Lorraine, was knighted in 1626 by Duke Charles IV of Lorraine.Jean-Baptiste-Louis is lord of Pange and "Treasurer of extraordinary wars" in Metz for the King of France. He became the first Marquis of Pange when land is erected in marquisate by the grace of the king of Poland Stanislas Leszczynski on 1 January 1766.The field of Pange has hosted several cultural figures like the Empress Marie Louise in 1813, Napoleon III and William I of Prussia, who successively stay during the Franco-Prussian War of 1870.The historian and pioneer of the idea of ​​Europe Jean de Pange died there in 1957. The former pilot of the Normandie-Niemen, Jean de Pange, born in 1917, died there Oct. 6, 1999.After the Second World War, the castle was given to an association to receive children in need. This children's home was closed in 1983.The barn seventeenth century, facades and roofs of two buildings northeast are the subject of a registration as a historic monument since December 19, 1986. The facades and roofs of the castle (porch and terrace on the Nied) the hall, the staircase with its ramp, the hall and the dining room (tiled stove), the show tells the Tapestries and the alcove room are subject to a classification as historical monuments since 6 December 1990.The castle still belongs to the family of Thomas Pange, which were part of Pange François, Anne-Louise Domangeville, Jean de Pange and his wife Pauline de Broglie, Countess of Pange.

How To Get To Château de Pange (Map):