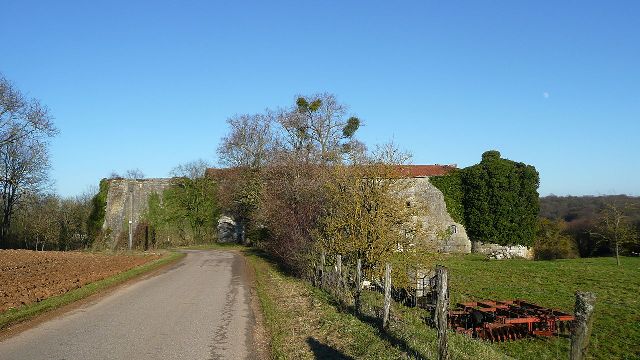 Location: Martincourt, in the Meurthe-et-Moselle departement of France (Lorraine Region).
Built: 14th century.
Condition: In good condition.
Ownership / Access: Private property.
ISMH Reference Number: PA00106080
Notes: Château de Pierrefort is a medieval castle, located in Martincourt in the present department of Meurthe-et-Moselle, in the Esch Valley. It is the subject of a classification as historical monuments since 1862 by list.The earliest mention is recorded in a book of the sixteenth Richard Wissembourg, Antiquitez Belgium Gaul, Kingdom of France, Australasia and Lorraine3: before the present castle was an older "and ruin everything Demoly". The new fortress was built in 1306. Pierre de Bar, the youngest son of Count Theobald II of Bar, from a family of thirteen children, received his elder brother Henry III of Bar in 1300, among other areas, the land and Martincourt Mamey. In this 1306 years, he made his letters of occasions in which appears the inscription "Namely, the chastel I do dessour Martincourt and the fortress and appendises all fully dou chastel said."