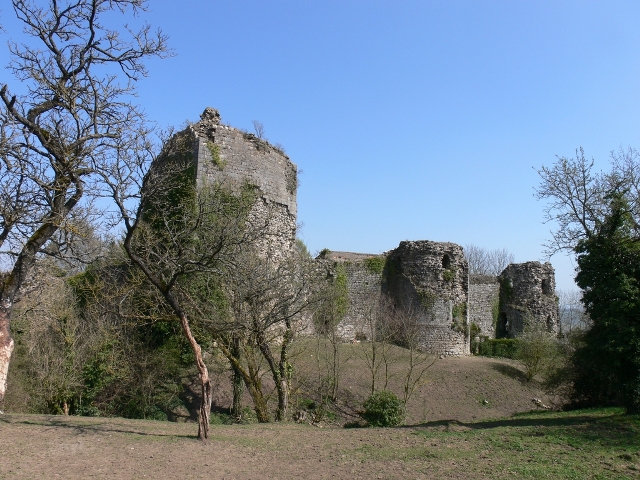 Location: Prény, in the Meurthe-et-Moselle departement of France (Lorraine Region).
Built: 11th century.
Condition: Ruins.
Ownership / Access: Owned by the municipality.
ISMH Reference Number: PA00106353
Notes: Château de Prény is a medieval castle, located Prény in the present department of Meurthe-et-Moselle, whose origin remains obscure. It was the last stronghold of the Dukes of Lorraine facing the bishops of Metz. It was located near the Castle of Dieulouard who it belonged to the Bishops of Verdun and the Castle of Mousson, possession of the counts and dukes of Bar. The castle is the subject of a classification as historical monuments since 1862, the guard enjoying a registration in 2001.The first castle of Prény was erected on lands of the Abbey of Saint-Pierre-aux-Nonnains which the Duke of Lorraine became confessed. First entrusted to the faithful of the Lorraine dynasty, the Conflans who became the Prény, the citadel became the twelfth century the residence of the dukes of Lorraine in Nancy before installation in 1298. While Matthias I, Duke of Lorraine, Duke of 1139-1176 was Prény, the castle was besieged by Stephen Bar, Bishop of Metz, who occupied the episcopal see of this city 1121 to 1162. In 1207, he was seized and destroyed part of the Count of Bar, Thiébaut I; rebuilt, it is a medieval military architecture masterpiece and becomes impregnable by force until the development of artillery. Thus, in 1262, the fortress held out for five months in a seat count of Bar troops, Theobald II. From 14 to 17 September 1266, a large battle pitted under its walls Lorraine and Luxembourg to Metz and Barisiens. In 1286, the citadel was valiantly defended by captain and provost of Prény Milo Vandières which, in popular tradition, will become the black horseman or knight of the High Hunting. Bouchard of Avesnes, bishop of Metz, had to give up his seat and make peace on the day of St. Bartholomew from the year 1290. The duchies of Bar and Lorraine have been unified in the fifteenth century under the banner of Rene I Anjou, its strategic utility is found in reduced and low maintenance assured because it was expensive to ducal finances. In 1437 the castle, which quickly retrieved his lorraine garrison was occupied by a Burgundian garrison, as a guarantee of payment of the ransom paid by the Duke of Lorraine to the Duke of Burgundy as well as in 1474, this time to ensure the Charles reckless free passage of his army. However, the young Duke of Lorraine, Rene II, having changed his mind, sent Gerard D'Avillers who, at the head of a detachment, seized Prény and entrenched them firmly. Thus, in 1477, the Grand Duke of the West was careful not to attack the fortress of Prény that greeted his passage from a volley of cannonballs. In 1632 the castle and its arsenal containing an outmoded weapons are occupied by French troops. Faced with the resistance of Lorraine Charles IV of Lorraine, Richelieu, chief minister of King Louis XIII, fearful that the Lorraine castles serve as a support to the forces of the Duke of Lorraine experiencing some success in some places the orders in 1636 dismantling the castle. This fortress then no longer meets any military role. Although national confiscated as during the French Revolution, it is sold at auction to a bourgeois Nancy 7 November 1797. However, during the German occupation of 1914-1918, the occupants integrated it into their defense system SINCE he was surrounded by a line of bunkers and various defenses. For this reason many parts were destroyed during the bloody fighting which opposed the German and American armies from 25 September to November 1918 shortly before the armistice.

How To Get To Château de Prény (Map):