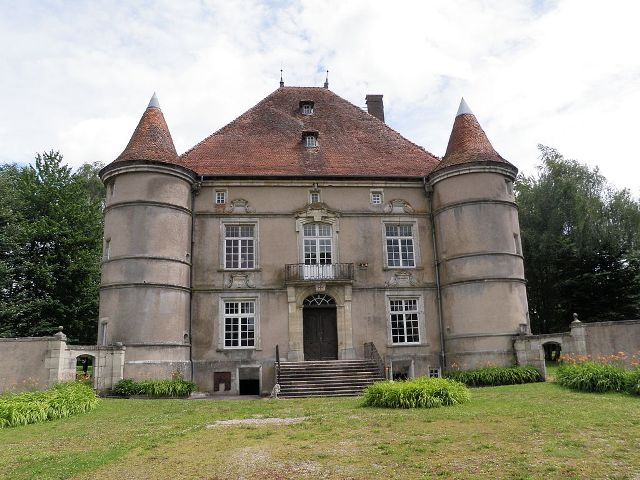 Location: Sandaucourt, in the Vosges departement of France (Lorraine Region).
Built: 16th-17th century.
Condition: In good condition.
Ownership / Access: Privately owned.
ISMH Reference Number: PA00107292
Notes: Château de Sandaucourt is a castle in the municipality of Sandaucourt west region of Vosges Lorraine.Le castle was bought in 1931 by the company Paul Couillard and Nancy Cie cheese which transforms it. Cellars then used to cheese ripening. In 1969 he was sold to the Breuil GIRARDEL company that turns it into home for immigrants working at the plant Manuest (Manufacture of eastern France, a subsidiary manufacturing Vogica) Châtenois. Restoration work began in 1976 when Dr. Kirsch and his wife Marthe Odile Lersy bought the castle. They restore and rehabilitate the state rooms which have preserved some of their woodwork, grand staircase and its cage, the pavilions of the entrance and dependencies. It is a historical monument April 2, 1980 (facades and roofs of the castle and the entrance pavilions, porch access and wrought iron railing) 1. The interior of the room where the columns was restored chapel is only listed building. It is also open to the public on that date. In 2000, Dr. Kirsch wishes to donate to the Lorraine Museum, which refuses. Finally it is Matthieu Cognet, the owner of the castle Thuillières, who acquired and continues the work of restoration initiated by Dr. Kirsch.