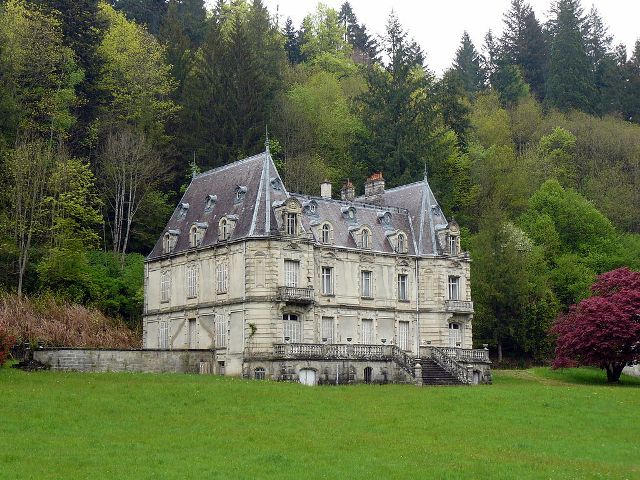 Location: Xertigny, in the Vosges departement of France (Lorraine Region).
Built: 1885.
Condition: In good condition.
Ownership / Access: --
Notes: Château de Semouse is a castle in the town of Xertigny south of the Vosges department in Lorraine. The castle was bought by an artisan Nancy in 1984. Until today, there been no registration or classification as historical monuments, but his identification has been integrated into the regional thematic studies (ancient metallurgy Vosges), industrial heritage and rural architecture Lorraine (Southern Vôge), conducted by the Regional Service of inventaire13,14,15. Other iron masters have built castles in the nineteenth century, as the castle of La Chaudeau family of Buyer, in Haute-Saône south of Le Clerjus, and Chateau Puton built in the eighteenth century by the ironmaster and farmer general Puton Georges (1679-1737). All these castles were built during the most flourishing period of the forges of Vôge. The castle has a roof with long tails and rumps slated. The elevation has a basement, a ground floor and three floors, including two in the attic. The chapel located west of the castle has a roof with long tails and hipped slated. It hosts the cellars of family Pruines including those of Victor Pruines († 1889) and his son Albert Pruines († 1922).