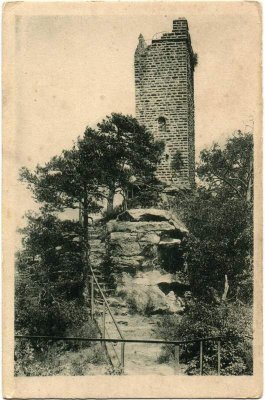 Location: Eguelshardt, in the Moselle departement of France (Lorraine Region).
Built: 13th century.
Condition: In good condition.
Ownership / Access: Owned by the Town.
ISMH Reference Number: PA00106755
Notes: Château de Waldeck is located in Waldeck gap in the French town of Eguelshardt and Moselle.Its access is via a trail from the pond Waldeck accessible away from Bannstein on the RN62. Built on a set of three rocks west of Waldeck away at the end of the thirteenth century, for the Duke of Lorraine Ferry III, the castle possible to defend the eastern marches of the field. The first mention of the castle of Waldeck date of 1316. It is then up to Kirkel, descendants of Sarrewerden, and part is given to Lichtenberg. The dungeon is an ideal observation post to control the road from Alsace to the Abbey of Sturzelbronn and the Palatinate. A feudal peace was signed in 1341 between Kirkel and Lichtenberg governing cohabitation in the castle. Kirkel family died in 1387 and in 1399, Count Hanemann Young Deux-Ponts-Bitche gives his hand in pledge to Lichtenberg. The castle becomes property of the Counts of Deux-Ponts-Bitche in 1395 and in 1443, Frédéric de Deux-Ponts-Bitche is the sole owner of the castle Waldeck, the Lichtenberg making no longer state of the castle from their properties. In 1570, the last count of Deux-Ponts-Bitche, Jacques, dies and Philippe de Hanau-Lichtenberg, his son, inherited the castle of Waldeck. Along different that occurred between Charles III and the family of Hanau-Lichtenberg about the payment of contributions due vassalage to the Duke of Lorraine, will be settled in 1606, when the county of Bitche, and therefore Castle Waldeck, will return to the Duchy of Lorraine. It was at that moment that terminal, defining the duchy of Lorraine and the county of Hanau-Lichtenberg, are asked. They are still visible today. The fortress was dismantled in 1633 by the French troops of the Force marshal. A new battle took place March 26, 1761 when the troops of Nicolas Origny, the infantry regiment Turpin dislodged the British battalion that was there, this victory hearkened life to Colonel Origny.

How To Get To Château de Waldeck (Map):