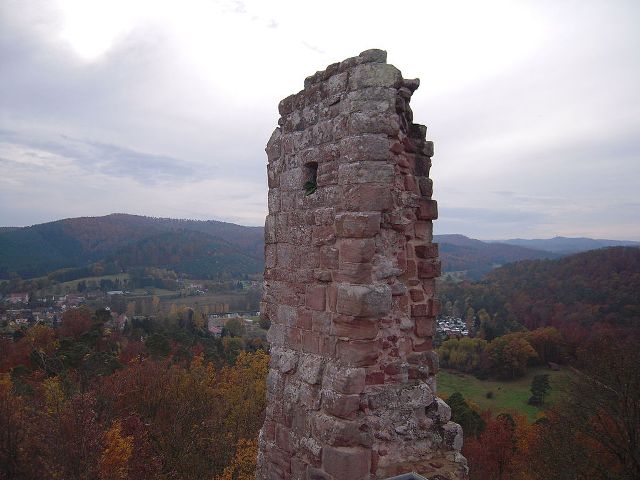 Location: Bærenthal, in the Moselle departement of France (Lorraine Region).
Built: 13th century.
Condition: Ruins.
Ownership / Access: State property.
Notes: Château du Ramstein is a ruin of the thirteenth century which is located in the Moselle department in the town of Baerenthal on a rocky ridge in a place called Schlossberg. The castle is built on a rocky platform variegated sandstone (or Bundsandstein) with a length of 270 m and 6 m wide on average. The rocky ridge offers support and is the primary element of defense fortification by its height and verticality. One can still distinguish the remains of the stately home whose verticality is visible from a distance, as well as doors, stairs, galleries and two cave rooms carved into the rock. There 's no vestige of a possible dungeon. A sandstone rock shaped like a mushroom is the ruins of the old castle. The castle is listed on Topographical inventory of the Lorraine region. The site is classified since 1938 under the laws of historical monuments. Located after Baerenthal to Mouterhouse, follow the street to access the Ramstein ruins. Continue straight towards the forest house. Parking has been arranged by the National Forest on the left at the entrance to the forest. A path leads to the ruins in ten minutes. It has a remarkable view of the village of Baerenthal and the Zinsel Valley.