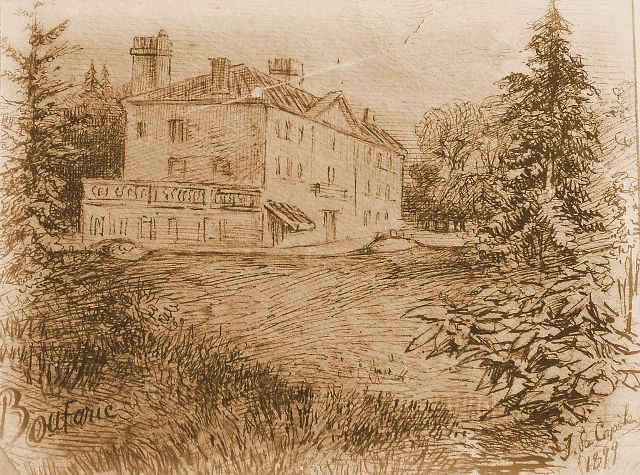 Location: Escatalens, in the Tarn-et-Garonne departement of France (Midi-Pyrenees Region).
Built: 18th-19th century.
Condition: In good condition.
Ownership / Access: Privately owned.
Notes: Château de Boutary is located in the town of Escatalens in Tarn-et-Garonne. Boutary Castle is a stately home built around 1789 on land Boutary (sometimes spelled Boutarie or '' Boutaric '' or Boutarique). The name of the castle comes from the name given to the land of the town of Escatalens on which it was built, itself derived from "Boutaric", the name of the Protestant family of Montauban who ceded the land in 1610. The castle was built by the name of Jean Pierre Anne Boutarie by Delpech (1758-1823), Lord of Boutary and Montech, treasurer of France at Montauban office and then president in office treasurers of France in Toulouse. It is then passed to Theodore Delpech and Marie Delpech Boutary, died in offspring in 1885. In the middle of the nineteenth, it is passed to Baron Joseph Marie Saint Vincent de Brassac, Toulouse, making it his second home. Marie-Louis Joseph, Baron Saint Vincent Marquis of Brassac and his son Felix is ​​making significant upgrades and development. Baroness Marie-Elizabeth Pulchérie Saint Vincent, born Fabre Latude will install on the death of her husband in 1888, the family home of Saint Vincent barons. The castle is not open.