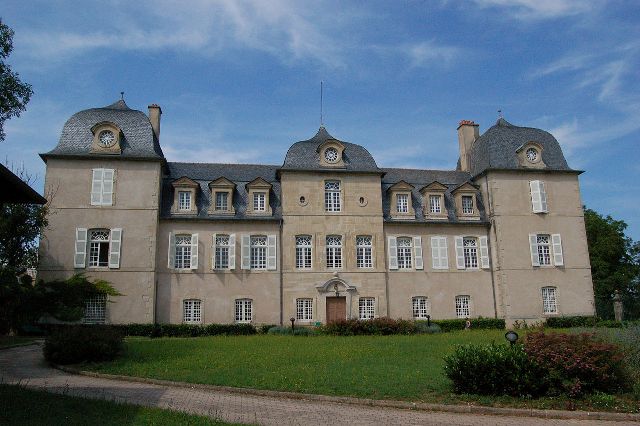 Location: Onet-le-Château, in the Aveyron departement of France (Midi-Pyrenees Region).
Built: 17th century.
Condition: In good condition.
Ownership / Access: --
Notes: Château de Floyrac, located 4 km north of Rodez, in the town of Onet-le-Château, was built around 1670 in a seventeenth-century style. It consists of two pavilions at the corners and a third in the middle of the southern facade. The castle is covered with a mansard roof, lit at the pavilions by a skylight in "oeil-de-boeuf" or oculus. In the early eighteenth century, the castle consisted of a chapel. During the restoration of the church Saint-Amans in 1617 Pierre de Jouéry, then owner of the castle and Floyrac Rodez County recipient, offered stones of an older castle which leaves us to think that would be another castle on the site of the current building. It was destroyed by fire in 1617. In 1621, the agricultural sector still had to have a certain importance, traces were found of a sale of 800 books that included four pairs of oxen, "topped cows" leading their calves, 4 calves, two bulls, six mares and a mule. Le present castle was built in 1670. In 1886 the estate was auctioned for a starting price of 150,000 francs, with facilities for the manufacture of cheese, 500 sheep, six pairs of oxen and four cows. He covered 359 hectares. The lease was 12 000 per year. In 1233 Floyrac was, Hugh agricultural domain Mandaviale. There are signs of property belonging to Mandaviale the fifteenth century. In 1490, Guy de Lugans ensured ownership of the manor. In 1545, the first Cassan family farmers become owners after the Jouéry, in 1617. The latter will be ennobled by acquiring loads, built the castle in the late seventeenth century. The front grille bears arms, "a hunting dog" (in the Occitan language caçant), then will the auction in 1886 for a starting price of 150,000 francs. During the German occupation, welfare association to the army settled in the castle a summer camp for children of the military from the occupied area. Then, the Directorate works to summer camps of Aveyron, it organizes courses of tutoring. Since, it is the General Council of Aveyron who installed the Childhood departmental fireplace.