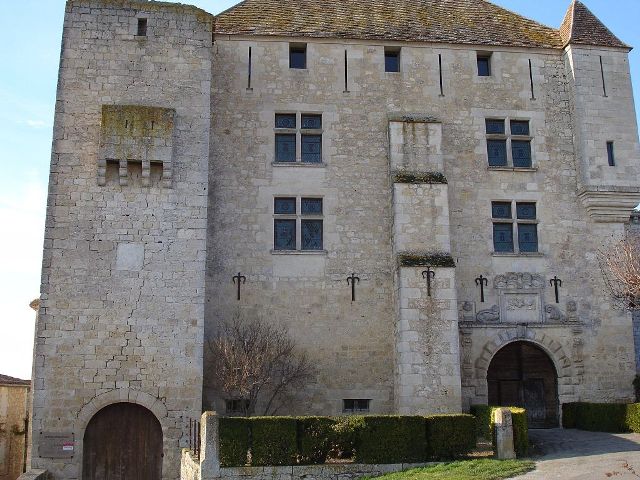 Location: Gramont, in the Tarn-et-Garonne departement of France (Midi-Pyrenees Region).
Built: 13th-16th century.
Condition: In good condition.
Ownership / Access: Owned by a public institution of the State.
ISMH Reference Number: PA00095754
Notes: Château de Gramont is a castle Southwest of France. Located in the department of Tarn-et-Garonne on the border of the Gers department in the town of Gramont. The Gramont castle dominates the small river Arratz, which draws a sinuous line between the hills of Lomagne. The castle belonged to Simon IV de Montfort, leader of the crusade against the Albigensians. He donated land and castle of Gramont his lieutenant crusade, Odon de Montaut. The castle became a fortress in the fourteenth century with the construction of the Gothic entrance, then between 1535 and 1545 built a beautiful Renaissance wing, placed square to the old castle, after the marriage of the last member of the House Montaut, Françoise de Montaut de Gramont, with Guillaume de Voisins. The owners, Mr. and Mrs. Dichamp, donated the castle to the National Monuments Centre. The facades and roofs, as well as the large reception room and inside straight staircase are classified as historical monuments by order of 21 February 1973; the rest of the castle has a registration from 1 April 1947. Access to the castle of Gramont is through a gatehouse to the porch topped by Gothic sculptures. The present castle was built in the fourteenth century on the remains of a former castle and consists of two parts, one part Gothic and Renaissance wing. Once past the gatehouse is accessed the Renaissance wing with mullioned windows. A vaulted staircase ribs, helical and without central core, leads to a small oratory. The rooms have kept the original floors, monumental fireplaces, French ceilings, period furniture. Of the castle, there is only a strong tower: the Simon de Montfort tower.

How To Get To Château de Gramont (Map):