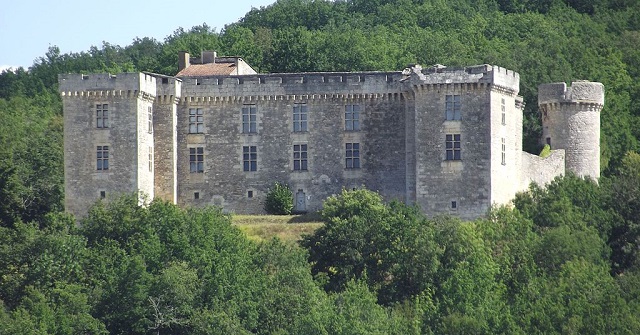 Location: Grezels, in the Meurthe-et-Moselle departement of France (Lorraine Region).
Built: 14th century.
Condition: --.
Ownership / Access: --.
Notes: The castle of La Coste is located in the commune of Grézels, in the department of Lot.Bernard I Guiscard participated in the Albigensian Crusade in the army of Simon de Montfort. As a reward, he received in fief from William of Cardaillac, bishop of Cahors, the castle and other lands. This donation is recalled in an act of 1267 which indicates that Bernard Guiscard had received these lands for more than forty years. In the will of Finelle, wife of Bernard I, made on July 10, 1286, the castle is called a hotel. The castle is described as a den in the homage paid by Bernard II to the Bishop of Cahors, Raymond de Pauchel, on November 12, 1301. Philippe VI put a troop there to keep the castle in 1348. It is the first time that it is called castle. Bernard III Guiscard is the captain. He had married in 1315 Helis de Montaigu, daughter and heiress of Bernard de Montaigu, Lord of Montcuq. From the beginning of the Hundred Years War, the castle had to undergo the attacks of the supporters of the King of England, including Raymond de Durfort. The latter had seized Bélaye, possession of the Guiscard, in 1346 and had kept it for two years. The present castle had to be rebuilt at the beginning of the war to improve its defense. Beginning in 1355, the region was plundered several times and especially after the Battle of Poitiers. The treaty of Bretigny, in 1360, makes the Quercy pass under the suzerainty of the king of England. The castle of La Coste is then under English allegiance between 1362 and 1372. The Guiscard are the vassals of the king of England. According to Guillaume Lacoste, Bernard III had foreseen in his testament made on April 11, 1353 that the eldest of his sons, Bernard IV, should be the heir to the castle, but that his younger brother, Guillaume-Bertrand, should be its governor. On April 17, 1368, Bernard IV pays homage to the castle of La Coste, Grézels and part of Bélaye, to the bishop of Cahors. There is a tribute paid in 1391 by a Guillaume-Bertrand, but it is not known if it is the same. In 1393, Guillaume-Bertrand I, by a coup de main, seizes the contribution paid to the English by the inhabitants of Cahors to have peace. He drafted his will on 9 February 1416. His son, Guillaume-Bertrand II succeeded him.