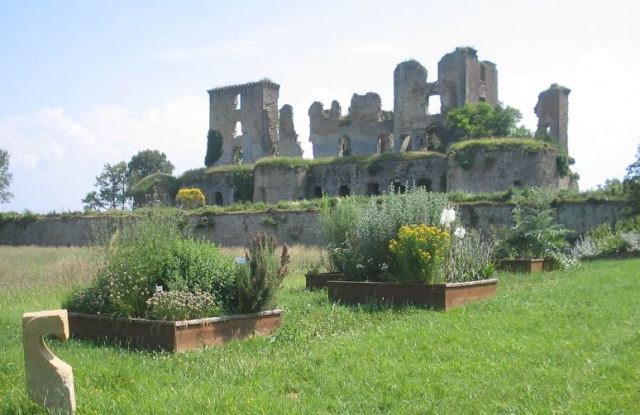 Location: Lagarde, in the Ariège departement of France (Midi-Pyrenees Region).
Built: 1063.
Condition: Ruins.
Ownership / Access: Privately owned.
ISMH Reference Number: PA00093800
Notes: Château de Lagarde is located on the French town of Lagarde, Ariege, near Mirepoix. Built from the eleventh century, the king of Aragon, Ramiro I of Navarre in fact first in a tower north of his kingdom and family Lévis lords of the Ile-de-France, winners of the crusade Albigensian, builds a castle in the fourteenth century on a hill overlooking the valley of Hers-Vif. He was the subject over the centuries many changes, at first it is defensive (until the mid-sixteenth century) then it will be transformed during the seventeenth century, into a splendid leisure palace. The castle is built on a square plan, four monumental towers, quadrangular, flanked residential buildings. The whole is enclosed by several speakers successive terraces and ditches. The castle falls gradually abandoned and was in ruins from the Revolution. From the beginning of the twentieth century, the fact remained that the remains already demonstrating its splendor and its past grandeur.The guard tower of the eleventh century was built in 1063 by Ramiro I of Aragon, king of Aragon. During the Albigensian Crusade, conducted against the Cathars by Simon de Montfort, it became part with the Mirepoix lordship of the gift that the King of France, Philip Augustus, granted to Guy I de Lévis in 1212, lieutenant commander of the Crusaders Simon de Montfort died in Toulouse in 1218. This is the beginning of the dynasty of the noble Parisian house of Lévis (named after the town of Ile-de-France between Chevreuse and Montfort l'Amaury), Guy I. Levis and Guy III de Lévis become alternately guard tower masters hence the name of the small town of Lagarde created a century later. In the early fourteenth century, Francois de Levis-Mirepoix had built a large square-shaped castle on a rocky site. It was at this time that the four monumental towers were built. Lagarde The castle was built as well. At the turn of the fifteenth and sixteenth centuries, Jean V for Levis-Mirepoix, owner of Chateau de Lagarde, is a powerful and rich character. He is the Seneschal of Carcassonne, advising successive kings Charles VIII, Louis XII and Francis I, then lieutenant general of the king for the Languedoc. It will dramatically transform the castle of his ancestors, replacing the old houses of the Middle Ages by influences of the Renaissance while preserving the medieval structure. He also strengthen the outer defenses of the castle will now be able to defend itself with the new weapon of artillery.