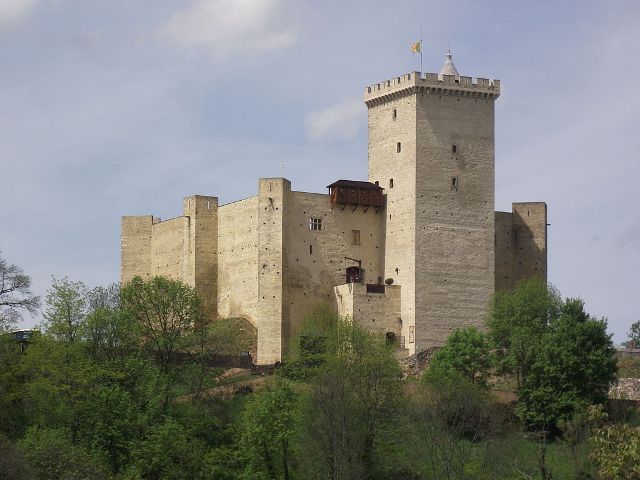 Location: Mauvezin, in the Hautes-Pyrénées departement of France (Midi-Pyrenees Region).
Built: 11th century.
Condition: In good condition.
Ownership / Access: --
Notes: Château de Mauvezin is a medieval castle, located in the French department of Hautes-Pyrénées region in Languedoc-Roussillon, Midi-Pyrénées, in the territory of the municipality of Mauvezin near Capvern. The site, occupied from early history, turned into the High Middle Ages castrum. A castle was built in the eleventh century by the Counts of Bigorre. It was rebuilt by Gaston Phoebus to 1380. It remains in the family of Béarn-Foix who later become kings of Navarre, and passes to Henry IV. It fell into disuse after the annexation of Bigorre in the kingdom of France in 1607; it is the end of castles for defensive purposes. It was dismantled gradually, then its stones used for other constructions. Today the castle is being restored and houses a historical and folk museum of Bearn and Bigorre. The castle and dungeon Gaston Phoebus were registered historic monument by decree of 22 December 1941. Mauvezin Castle with its walls and square tower is a typical example of Southern military architecture. The dungeon of thirty-seven meters high has walls three meters fifty thick at the base and two meters high. They are built largely with pebbles of Arros, mixed in places with layers of brick. The lime used came from nearby quarries, located northwest of the castle. The walls of the fortress quadrangle form a rectangle thirty-five meters aside fifteen meters high, consolidated by seven thick buttresses and crowned by a walkway to two meters wide. The walls are topped with battlements. The castle is fully restored. Two videos rooms present the history of the castle and restores. In the dungeon, six appointed rooms show scenes from daily life in the Middle Ages. The castle is open for free visits every day and all year. Guided tours are offered daily in July and August and all year by appointment for groups. Theme days and school visits are also possible. Performances are held every Sunday in July and August.

How To Get To Château de Mauvezin (Map):