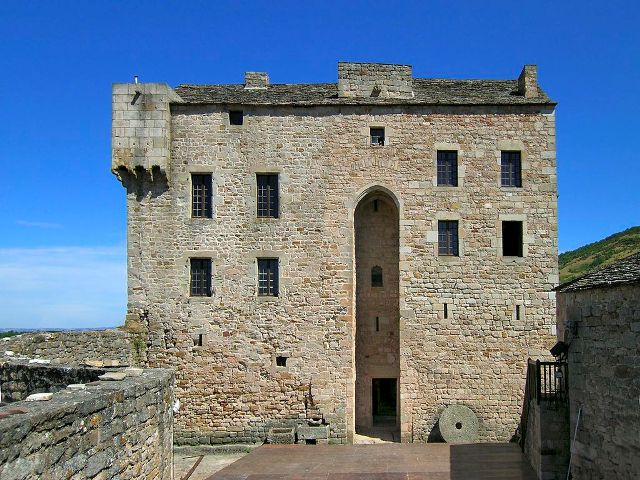 Location: Gissac, in the Aveyron departement of France (Midi-Pyrenees Region).
Built: 10th - 15th century.
Condition: In good condition.
Ownership / Access: Owned by an association.
ISMH Reference Number: PA00094035
Notes: Château de Montaigut is a castle dominating the Rougier de Camarès and dependent on the commune of Gissac in Aveyron.The first traces of the castle of Montaigut date from the tenth century. Built on a rocky outcrop overlooking the valley of Dourdou Camarès, the castle is built on a necropolis from the Middle Ages. It was at that time a simple guard tower defending the town of Saint-Afrique against attacks from the south. Castle Montaigut is enlarged and transformed in the fifteenth century by the family of White, making his residence.Then in the seventeenth century, its new owner, the bourgeois Rouvelet, restores all by plastering interior walls, its defense system is dismantled and a slate roof is added.In the nineteenth century, the castle was used by peasants and farmers of the area. It was abandoned in the 1920s and falling apart.The Friends of Castle Montaigut, which becomes owner in 1968, undertook a vast restoration operation. The castle will be permanently saved in 1989.

How To Get To Château de Montaigut (Map):