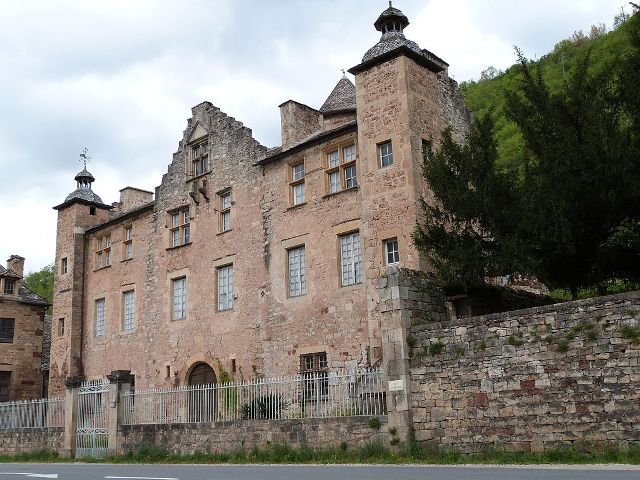 Location: Rivière-sur-Tarn, in the Aveyron departement of France (Midi-Pyrenees Region).
Built: 12th-15th century.
Condition: Ruins.
Ownership / Access: Owned by the municipality.
ISMH Reference Number: PA12000012
Notes: Château de Peyrelade (Castel Peiralada Occitan, Latin Petra Lata Pierre = Large) is a medieval fortress from the eleventh century and the sixteenth century. Under restoration since 1977, it is located in the municipality of Rivière-sur-Tarn in the Aveyron department. The special feature of the site is its built on a rocky outcrop overlooking the Tarn Valley. Thanks to its position that controls the entrance to the Tarn Gorges, it is one of the most important castles of the former province of Rouergue. Of the 100 Years War, the Wars of Religion, through the onslaught of road, Peyrelade was coveted Lords who shared the co-lordship. The end of history seems to date from 1663, when Richelieu had ordered its dismantling. Works of excavation and restoration are engaged in it since 1977, under the initiative of Pierre Bloy, mayor of Rivière-sur-Tarn from 1977 to 2008. Open to visitors since 1996, the castle welcomes visitors every year from May to September. On site: free or guided tour, set design, entertainment in summer. The ruins give a good idea of ​​the organization of the castle. The wall is over 250 m, 10 m high and up to 2.1 m thick. The castle is dominated by a rocky outcrop on which rests a keep in good condition. In the Middle Ages, a triple ring of walls around him. It was reached at the first two doors; the second was protecting a main building and a parade; the third surrounded the high tower of 50 meters, which was reached by a drawbridge and overlooking a terrace. This dungeon contained an oven, a cistern and a belfry whose bell sounded in case of danger. Castle Peyrelade is part of a group of 23 castles in Aveyron who have joined to form the tourist path of the Route of the Lords of Rouergue. It is open to mid-June to mid-September visits. The castle is listed as a historic monument since March 6, 1998. The dungeon is open to visitors since 1996.

How To Get To Château de Peyrelade (Map):