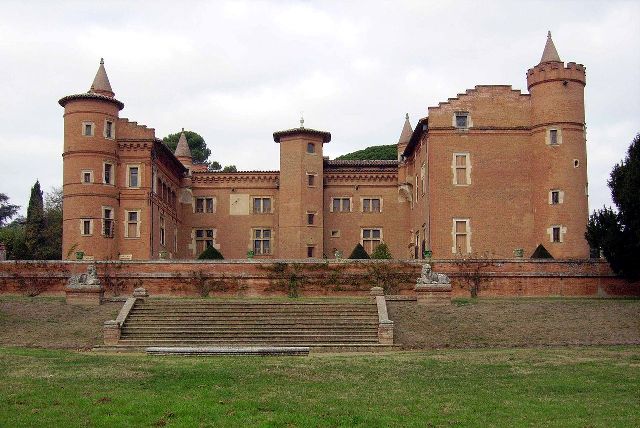 Location: Pibrac, in the Haute-Garonne departement of France (Midi-Pyrenees Region).
Built: 16th-19th century.
Condition: In good condition.
Ownership / Access: Privately owned.
ISMH Reference Number: PA00094418
Notes: Château de Pibrac is located in the municipality of Pibrac in the department of Haute-Garonne in France. Pibrac Castle was rebuilt in 1540 to replace the former defensive manor by a summer residence and the architect Nicolas Bachelier seems to have been loaded. Around 1669, Anne Jacquette du Faur Pibrac wife of Pierre de Montfaucon, baron Vissec and Hierle. During the Revolution, in 1794, the sculptures are hammered and découronnées towers. The castle was restored in 1887. The Castle of Pibrac, Renaissance is built in red brick. The portal which dates from the sixteenth century has a vault with three hangers. It is surmounted by a small terrace flanked by two square pavilions connected by a triangular pediment and leaning against a wall crowned by four towers based on an elaborate cornice. The castle itself consists of an ancient central body and wings built in 1540. The north wing is flanked by a round tower with terrace has a staircase tower. The second floor of the south wing includes an updated gallery or mirande. The central tower is cut sides and interior angles on the court include watchtowers. One room, called the "cabinet of Quatrains" has arches decorated with mythological subjects dating from the sixteenth century, the molded or painted beamed ceiling joists have been preserved, and the lower room brick fireplace is adorned with a great Renaissance cartridge. The castle is a listed building since 1932 and the portal was ranked in 1947. The park of the castle of Pibrac, open to the public, is also to be seen. It was designed in a very refined style by landscape architect Eugène Bühler in 1897, with terraces, a pool and massive wooded 14 ha. This is an English park, an irregular garden enrolled in pre-inventory of remarkable gardens. This is the park that is the door Henri IV, a triumphal arch in red brick.