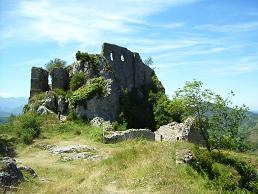 Location: Roquefixade, in the Ariège departement of France (Midi-Pyrenees Region).
Built: 12th century.
Condition: In good condition.
Ownership / Access: Owned by the municipality.
ISMH Reference Number: PA00135437
Notes: Château de Roquefixade (Occitan: Lo-Fissada Castèl Roca) is a Cathar castle located in the town of Roquefixade in the department of Ariege between Foix and Lavelanet. Its name comes from the arch that spans a gap on the northern slope.The castle is mentioned for the first time in 1034. In 1205, the marriage of Raimon Péreilhe with Corba Lanta is celebrated there. The Lord also owned the castle Péreille and that of Montsegur. It serves as a refuge and place of resistance to the Albigensians in the thirteenth century. In 1212, Simon de Montfort took the castle which then depends on the counts of Toulouse. It is seized in 1272 by the King of France Philip the Bold, after the count of Foix Roger-Bernard III, with whom he was in trouble, will be made. There up a royal garrison of fifteen soldiers in 1278 whose purpose is to monitor the border with the neighboring kingdom of Aragon. The castle underwent various revisions of the fourteenth in the sixteenth century and was finally destroyed in 1632 by order of Louis XIII. In 1675, Baron of Celles bought the castle and the family keeps it until the French Revolution. The remains of the castle are classified as historical monuments since 17 February 1995.The castle includes two speakers, the second by a narrow canal, leads to the center of the castle by a postern. Built on a fault, an arch spans this northern slope.

How To Get To Château de Roquefixade (Map):