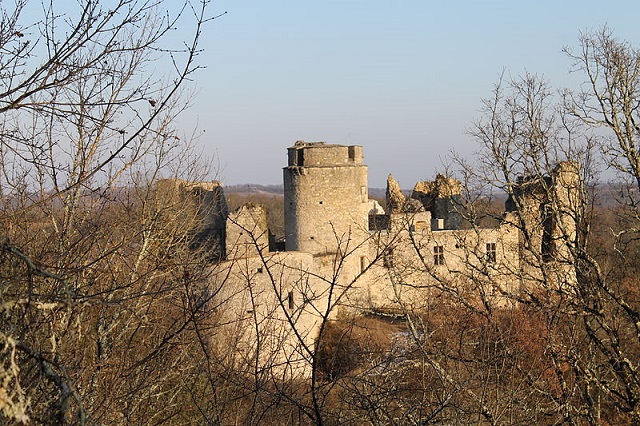 Location: Saint-Pierre-Lafeuille, in the Meurthe-et-Moselle departement of France (Lorraine Region).
Built: --.
Condition: --.
Ownership / Access: --.
Notes: The castle of Roussillon is a medieval fortress of the commune of Saint-Pierre-Lafeuille, in the Lot.Protected by moats, the castle consists of three towers and a large main building bordering two inner courtyards. It has a recent restoration and is habitable.The castle of Roussillon was built from the thirteenth century to the fifteenth century, presumably on the remains of a stronghold of the eighth century belonging to the duke of Aquitaine. Originally, the castle had eight towers and three main buildings, as well as a chapel and a cloister. It served as a fortress and as a pleasure castle. He then commanded the region north of Cahors and the valleys of the tributaries of the Lot. In 1355, during the Second Hundred Years' War, the castle passed into English hands when Raymond d'Antejac, Lord of Roussillon, recognized the King of England's rights over the crown of France. After being a stronghold of Protestantism in the sixteenth century, the castle of Roussillon, then owned by John III of Gontaud-d'Oriolle, received King Louis XIII in 1632. From the beginning of the eighteenth century, the castle was gradually abandoned by its owners. Its partial ruin preserved it from the destruction of the French Revolution, but in the nineteenth century it was used as a stone quarry for the surrounding villages. Dismantled and severely damaged, the building was restored from 1958 by the Mailhol family. The castle has now found part of its anterior aspect.

How To Get To Château de Roussillon (Map):