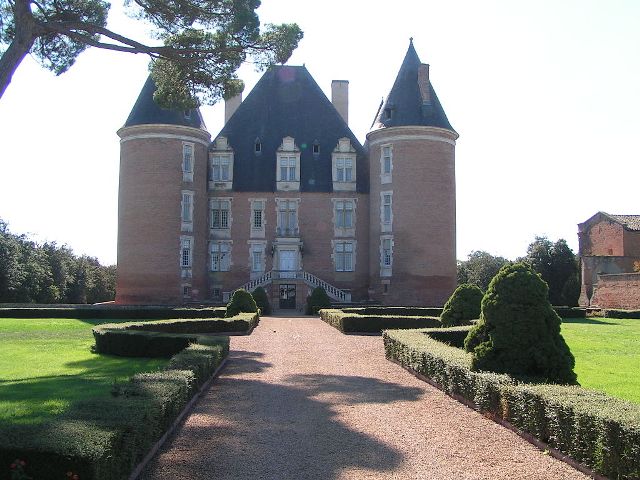 Location: Saint-Élix-le-Château, in the Aveyron departement of France (Midi-Pyrenees Region).
Built: 16th century.
Condition: In good condition.
Ownership / Access: Private property.
ISMH Reference Number: PA00094452
Notes: Château de Saint-Élix-le-Château is a French Renaissance castle located in the municipality of Saint-Élix-le-Château in the department of Haute-Garonne and the Midi-Pyrenees region. met, and towers, battlements and roofs have been slaughtered in the Revolution. The home with exposed brick walls is a square flag in the ground floor with basement and first floor. There existed a second floor attic that was destroyed by fire in 1945. The house is flanked by two round towers with floors on the ground floor. The roofs of the towers of the north facade, slaughtered during the Revolution, were restored in 1847. Sculptures and mullioned windows sign lavishness. The castle was registered as a historical monument January 31, 1927. The pleasure garden of the castle of Saint-Elix is ​​a regular garden enrolled in pre-inventory remarquables5 gardens. The park, formal garden, orangery, walls closing, the stables, the basin and the pigeon were registered historical monuments February 3, 1994.

How To Get To Château de Saint-Élix-le-Château (Map):