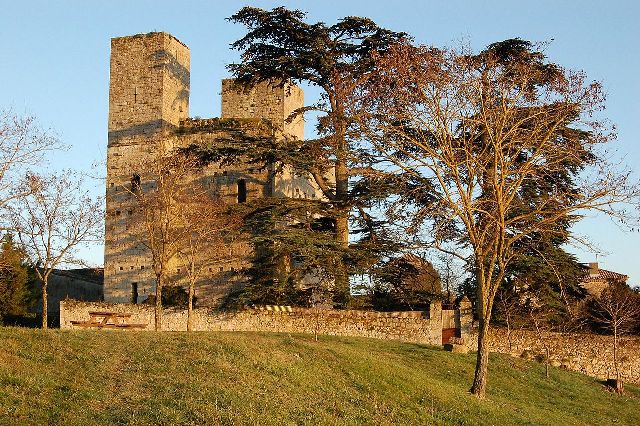 Location: Sainte-Mère, in the Gers departement of France (Midi-Pyrenees Region).
Built: 13th century.
Condition: In good condition.
Ownership / Access: Privately owned.
ISMH Reference Number: PA32000007
Notes: Château de Sainte-Mère is a type of castle "Gascon", built in the second half of the thirteenth century (probably around 1277) in the town of Sainte-Mère (Gers), 10 km north of Lectoure.The castle, although in ruins (it has neither cover nor interior floors) is apparently fairly well preserved in its masonry, having undergone some alterations after its construction. From the north, its silhouette stands atop the hill of the village of Sainte-Mère. It offers all the features of the Gascon castle: small footprint, quadrangular building height, two plane towers nearly square at the corners (here it is not, as elsewhere, the opposite angles, but both towers are aligned on the north wall), ground floor blind. Access was via stairs or an escalator to the first floor. The central body, measuring 18 m by 11 m, to a current height of 15 m, was on three levels, the ground floor used to store and possibly lodging for the garrison, the upper floors in one piece (without masonry shear walls), being the floors for residential use. The tower is the largest, measuring 5.5 m square and 26 m high. A staircase in masonry screws allowed to reach the top. The west tower is 3 m 2 and 20 m high. There were few openings, except narrow Phillips archers and some deadly. The only change was the opening of a mullioned window in the fifteenth century. The residential floor is equipped with sinks, closets, fireplaces. The castle, built in neat device, has no defensive features to speak of, no outer defenses or ditch, or glaze, or pregnant, no bretèches. The two towers bare of the facade do not provide a flanking role. Besides the cramped size of the castle did not allow him to lodge a garrison sufficient for a siege or military actions. The coronation disappeared does not know if it was provided or castellated battlements. The presence of bearers and crows may suggest the presence of wooden hoardings and perhaps a walkway. However, the village itself was to have a chamber consisting of a simple wall and a gatehouse, become the church's bell tower. An eighteenth century mansion next to the castle.