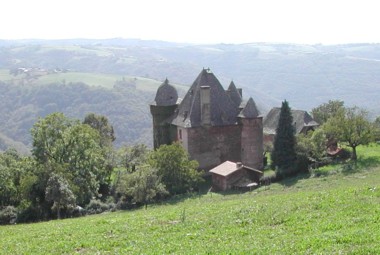 Location: Grand-Vabre, in the Aveyron departement of France (Midi-Pyrenees Region).
Built: 16th-17th century.
Condition: In good condition.
Ownership / Access: Privately owned.
ISMH Reference Number: PA00094037
Notes: Château de Selves is a sixteenth century mansion, rebuilt in the seventeenth century in the hamlet of Vinzelle the town of Grand-Vabre, in the department of Aveyron.Le Castle Selves is the subject of a classification as historical monuments since August 31, 1992.It was formerly owned by the family of Selves after having been by that of Gausserand lords Vinzelle and Lamothe. Towards the end of the seventeenth century, it passed, by marriage, to the house of Cambefort, then in that of Trédolat. Maurs a magistrate, became owner by auction and yielded, in 1913, Mr. Julien Poujade. It is currently owned by the family Poujade.