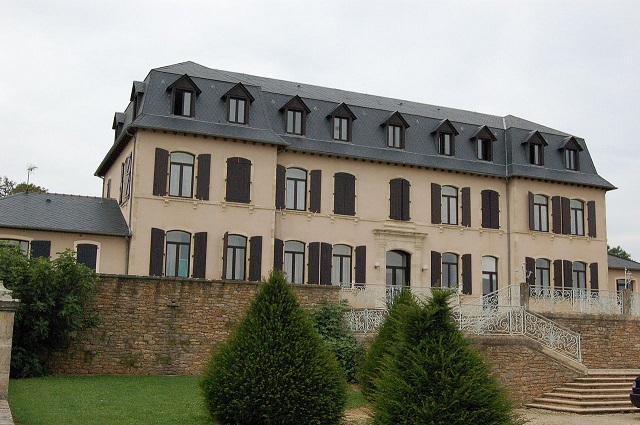 Location: Onet-le-Château, in the Aveyron departement of France (Midi-Pyrenees Region).
Built: 18th century.
Condition: In good condition.
Ownership / Access: --
Notes: Château de Vabre is located 5 km north of the town of Rodez on Onet-le-Château in Aveyron (France) on the road to Marcillac. The building, mansion-type, built in the early eighteenth century consists of a large main building, between two pavilions brimming slightly. The entire southern type is topped with a roof Mansard, lit by large skylights. The building is separated from the park by a gate emblazoned which dates only from the second half of the nineteenth century. The vast park is enclosed on one side by grids, while a high wall, flanked to the southwest corner of a tower-loft, closes the other sides. The construction of this castle is attributed to the family of Balsa then of Guirbaldi. In the early seventeenth century, the castle was for the Balsa1 family. In 1704, it will be for the Guirbaldi family, then to the middle of the eighteenth century, it will be alienated to Tustet family. In the early nineteenth century, the Coignac made it to the acquisition until Mrs. widow Coignac sell it to Mr. Campergue, stockbroker who sold it to Mrs. Séguret-Saincric. This restored the castle and closed the park with a gate and a wrought iron gate. In 1910, Ms. Séguret-Saincric bequeathed the property to the city of Rodez, which still owns. In order to respect the last wishes of the donor, the city of Rodez transformed the castle into an orphanage; in 1959, there were only one more boarder.