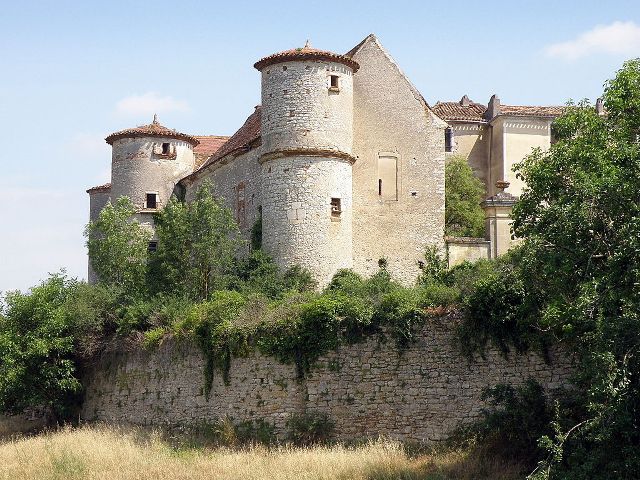 Location: Arcambal, in the Lot departement of France (Midi-Pyrenees Region).
Built: 13th-17th century.
Condition: Partially ruined.
Ownership / Access: Privately owned.
ISMH Reference Number: PA00094964
Notes: Château du Bousquet is a castle on Arcambal, France. The building is registered as historical monuments in 1979. The family of Arcambal is known by consuls of Cahors between 1230 and 1307. Knowing the family Bousquet starts with Jean Bousquet, knighted in 1341, brother of Cardinal Bernard Bousquet, archbishop of Naples. Jean Bousquet could be the builder of the first building. It was after the end of the Hundred Years War began the construction of the large central tower, between 1484 and 1525 and a significant part of the building as shown in the rose motifs and use écotés of sticks. In 1528, the heiress of the Catherine Bousquet castle wife Deslax a member of the family. In the seventeenth century the family Deslax Arcambal built the towers of the west facade and balustrade terrace. In 1787, completely ruined, the Marquis d'Arcambal Deslax, marshal of the camps and armies of the King, must sell the castle. The property is sold again in 1804, then in 1816, the ancestors of the current owners. The castle Bousquet is registered as historical monuments March 2, 1979.