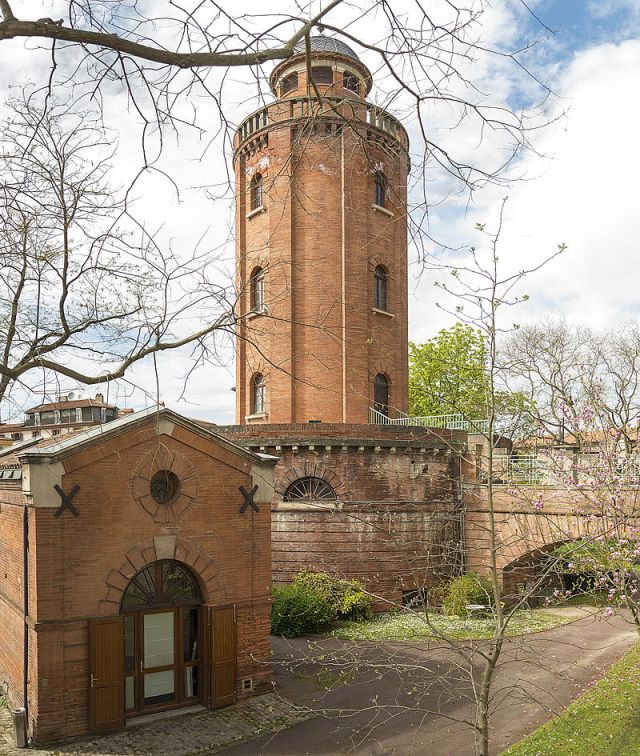 Location: Toulouse, in the Haute-Garonne departement of France (Midi-Pyrenees Region).
Built: 19th century.
Condition: In good condition.
Ownership / Access: Owned by the municipality.
ISMH Reference Number: PA00094504
Notes: Le Château d'eau, photographic center of Toulouse, more commonly known as Le Château d'eau Gallery or simply the local water tower is a brick tower located at the junction of the course Dillon and the Pont Neuf in Toulouse. As the name suggests the building was originally used for water distribution in the city center but was not strictly speaking a water tower since it did not include a storage tank. It was converted in 1974 into an exhibition space dedicated to photography and is now a popular place of Toulouse, as well as a mecca of culture. The Water Tower and Pumping Station are the subject of a registration as a historic monument since September 28, 1987.The primary function of this water tower was to distribute water from the Garonne, captured and filtered few meters away, on the meadow filters. At his death in 1789, the Charles capitoul Laganne bequeathed fifty thousand gold to the city in order to "distribute waters of the Garonne, pure, clear and pleasant to drink." Charles Laganne precise in his will that the money should be used within 10 years after the death of his widow. Political uncertainties will delay the use of this providential envelope but the death of Ms. Laganne in 1817 will encourage the city to find a solution, a task to which Jean-François d'Aubuisson de Voisins (1762-1841), a position in Mining engineer Toulouse and councilman is tackling the same year and on which he worked almost ten years, studying and defining the principles and water circulation systems necessary (filtering, canals and pipelines). A competition was launched to design the hydraulic machinery of water will rise and won three years later by Jean Abadie (director of Cannon Foundry Toulouse), while the architect Jean-Antoine Raynaud is responsible for designing the building . The works were launched in 1821 for completion in 1825 and supply a vast network of operational wells from 1829 and then developed. Very popular these days, building aesthetics is similar to a lighthouse (others have likened to a "little Castel Sant'Angelo") but is now considered very ugly back then, now acclaimed for its strength aspect that pleased the eye and mind. In the 1830s, the building and its water network will be regularly cited by France among the remarkable achievements of the industrial era. Victim of its success and quickly outdated, the water tower was decommissioned in 1870 and turned into tooling deposit by the municipality for the service menders.