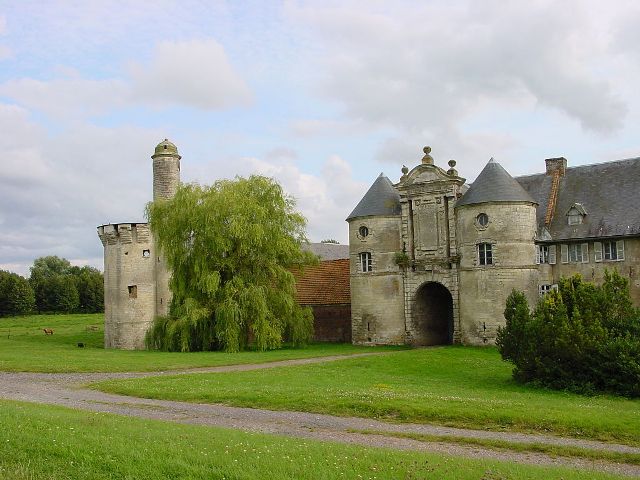 Location: Esnes, in the Nord departement of France (Nord-Pas-de-Calais Region).
Built: 12th-18th century.
Condition: In good condition.
Ownership / Access: Privately owned.
ISMH Reference Number: PA00107516
Notes: Château d'Esnes is a castle in Esnes in the Nord department, in the village center. It is the subject of a filing and registration as a historic monument since October 1971.Dating from the eleventh century, 1007 to be precise, this castle was built by Alard of Esnes, the first of the 12 pairs of Cambrai. Four generations later, Alard II (1105) will have as a girl heiress who married Eustache de Landas, lord of Eyne in Flanders, fourth son of Amaury VI and Ermentrude Bethune. The house Esnes thus passes into a branch of the family of Landas, we will call the Landas Esnes. They will carry the old weapons, that is to say silver (white) at the edge of sand (black). Around 1260, Alix de Beauvoir, Gerard de Landas Esnes wife, gave birth to one daughter (Alix). She married Alard Croisille wearing mouth as weapons (red) at 10 golden diamonds (yellow) placed 3,3,3,1. He will pass the house of Landas-Esnes in his family, and not being the eldest, he decides to take the name of Esnes. To confirm the new name, it will maintain its image but taking the colors of Esnes-Landas. His new weapons are therefore sand (black) to 10 silver diamond (white) who become permanently the arms of the lords of Esnes. The lords of Esnes will mostly homage to the Count of Hainaut and will be part of this army in various campaigns against the Duchy of Brabant, Limburg, Flanders etc. Yet John I at the beginning of the Hundred Years War will return his homage to the Count of Hainaut, allied to the English, to serve the king of France. He was killed at the Battle of Poitiers in 1358. Several lords of Esnes will bailiffs of Cambrai and Amiens. Robert Esnes said Mansart in 1411, the Duke of Orleans man, lord of Esnes, Grécourt, Wavrechin, Vire, Betancourt and Beauvoir will be governor of the castle of Coucy defend it for 3 months, besieged by Count Saint-Pol. He will go after much fighting for want of provisions. The castle was sold in 1603 by a descendant of Joan of Esnes, John to Beauffremez. Adrien Beauffremez also had a daughter, Jeanne, who married the Marquis Assignies, great grand son of Margaret of Esnes. The Estutt Assay, their descendants, so from both Esnes and Beauffremez, not inhabited the house, which became the last century a strong castle. Since the Revolution, it was used as farm buildings. He served as German prison for Russian soldiers during the First World War. Castle of Esnes still belongs to the descendants of this family, the Estutt Assay since 1000 years.

How To Get To Château d'Esnes (Map):