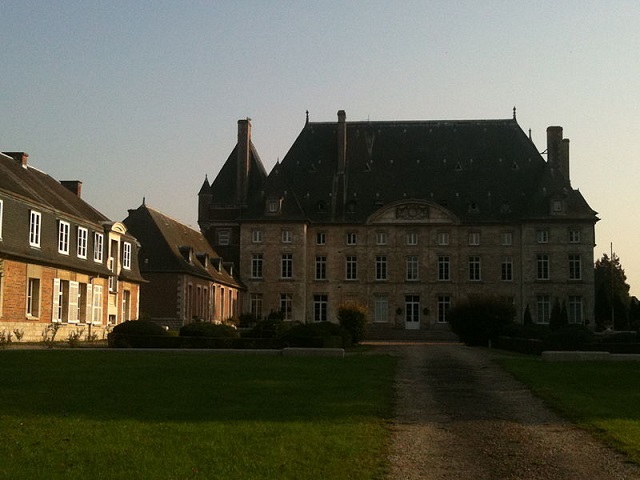 Location: Morbecque, in the Aveyron departement of France (Midi-Pyrenees Region).
Built: 1065.
Condition: In good condition.
Ownership / Access: Aeronautical institute Amaury de la Grange.
Notes: The castle of La Motte-aux-Bois was built in 1065 by Robert the Frisian, count of Flanders. The former commune of La Motte-aux-Bois merged after the Revolution between 1790 and 1794 with Morbecque. The castle is now in the territory of Morbecque.The chateau was given as a dowry to Mathilde de Portugal, wife of Philip of Alsace. 1164 Saint Thomas Becket (1117-1170), Archbishop of Canterbury, voluntarily exiled to France, left England on 2 November 1164 and stayed at the castle before being assassinated by King Henry I of England on 27 December 1170. 1328 The Duke of Normandy dismantles the castle after a siege during the Battle of Cassel. The castle is inhabited by Isabella of Portugal (1397-1471) wife of Philip the Good and mother of Charles the Bold one. On the 8th of February, 1614, chatellienie was erected into a county by letter from the archdukes Albert and Isabella in favor of Robert de Saint-Omer (1617), 1st Earl of Morbecque (8 February 1614), 1st Earl of Moerbeeck, Viscount d'Aire, Baron de Robecque, Lord of Dranouter, Runeschuere, La Bourre, Souverain-Moulin, Saint-Quentin and other places. Robert de Cassel and his wife Jeanne de Bretagne occupied the castle in the fourteenth and fifteenth centuries. The castle was taken by the French in 1645 and rebuilt in 1660 in the near-current state. The castle hosted the headquarters of the Commonwealth armed forces during the First World War. It now houses the Amaury Aeronautical Institute of the Grange with reference to Amaury de la Grange, politician and French aviator of the First World War who owned it. The library of the castle of La Motte-au-Bois is the headquarters of the association 'Memory of the stones' which is responsible for safeguarding the heritage in connection with the castle and organizes the visits during the European Heritage Days.