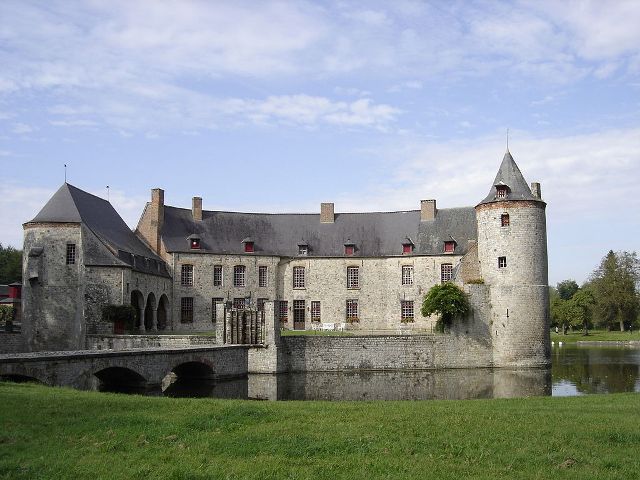 Location: Potelle, in the Nord departement of France (Nord-Pas-de-Calais Region).
Built: 13th century.
Condition: In good condition.
Ownership / Access: Privately owned.
Notes: Château de Potelle or Castle Potelles is a feudal castle located in the town of Potelle in the Nord department. The castle (and chapel located outside the moat) is the subject of a registration as a historic monument since 19 January 1944. The building is in the robustness of its sandstone masonry cut for preserving most of its medieval character. Protected by very wide moats fed by springs and crossed by Rhônelle, its irregular polygonal enclosure reinforced cylindrical towers has preserved its large external walls, where you notice, next to many deadly bites, several stone mullioned windows . Originally preceded by a drawbridge and defended by a portcullis and a stunner, input is taken between two round towers pierced by long archers subsequently expanded to allow passage of firearms. The former outbuildings occupying the bottom of the court were deprived of their floor after the fire of 1640. The round tower that their suite contains a prison, authentic low dungeon accessed by an eye drilled in the center of the vault, and provided latrines giving in the moat, below the water level. The small tower cantilevered at the end of the main building, initially cylindrical and rectangular, dragged by high watches destroyed in 1793. The destruction of the tower and the gallery that faced the main building allowed the early eighteenth century to open wide the courtyard of the park.