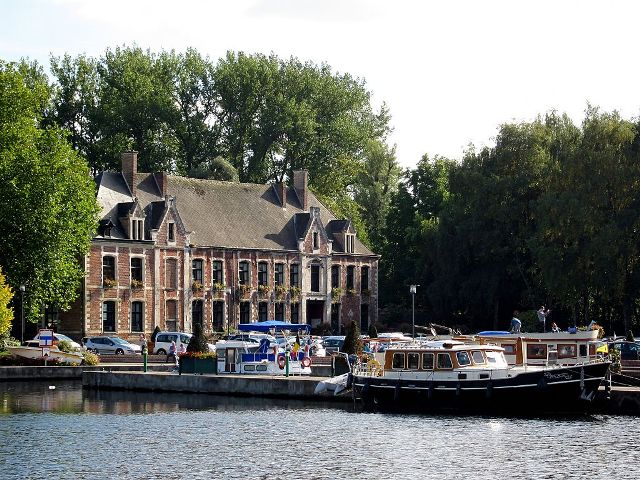 Location: Wambrechies, in the Nord departement of France (Nord-Pas-de-Calais Region).
Built: 13th-18th century.
Condition: In good condition.
Ownership / Access: Owned by the municipality.
Notes: Château de Robersart is located in Robersart Wambrechies in the Nord Department. The castle grounds, in the center of Wambrechies, was the residence of the lords of the city in the tenth century. Originally, it is the castle of Leuringhien built in the thirteenth century. The castle is a building shaped like a "U" Renaissance. The shifting terrain in the vicinity of the Deûle caused rotting pilings and the total collapse of the latter in the seventeenth century. In 1760, Louis Joseph Broide, Lord of Wambrechies, ordered its reconstruction. Two generations later, in 1810, the Vicomte de Quévy, historical figure of Wambrechies, bought the castle in order to close a complicated succession. Mayor of the town for almost forty years, he conducts numerous amenities. From 1866 the Countess Juliet Robersart Obert Viscount Quévy niece, inherited the estate and became the last lady of Wambrechies. Abandoned, the castle was deteriorating: the advanced Renaissance ended by collapse in 1900, year of the death of Juliet. Valois notary friend and executor of the Countess finally officially leave the house in the parish of Wambrechies in 1926. With the law on secularism Jules Ferry, the free school for boys it is installed around 1908 until 1959. The moats are filled to ensure the safety of children. The roof was redone in 1950. In 1971, a team of young Wambrecitains, supported by the association Save Castle Robersart, Regrooved moat. The parish sold the castle to the municipality in 1982 for a symbolic one franc and since 1983, restoration work began: the concrete piles driven to fifteen meters deep stabilize the building. The left wing was renovated in 1992. In 1997, a gas explosion damaged again strongly right wing, forcing the fully rebuild with a slight expansion in 1988 and 1999. The castle park and pond Robertsart registered pre-inventory of remarkable gardens. In 1998, part of the premises has been attributed to the Museum of Doll and Toy old.

How To Get To Château de Robersart (Map):