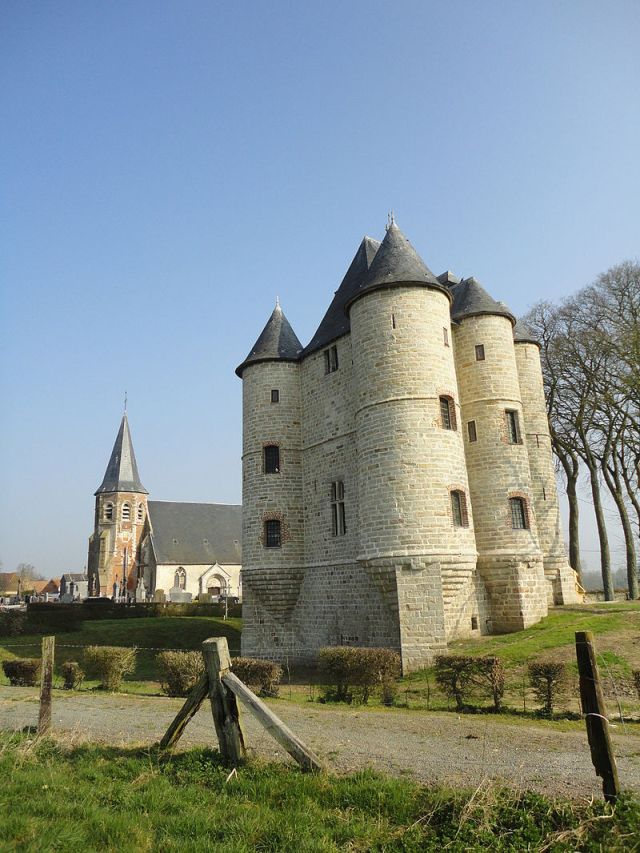 Location: Bours, in the Pas-de-Calais departement of France (Nord-Pas-de-Calais Region).
Built: 14th century.
Condition: In good condition.
Ownership / Access: Commune de Bours.
Notes: Donjon de Bours is a medieval relic located in the municipality of Bours, in the department of Pas-de-Calais, France. Historic monument since 1965, it is built in the fourteenth century. This is one of the oldest noble house of the region. This tower entirely in sandstone of Artois is built contiguous to the old feudal mound. It consists of a square flanked by six cylindrical corbelled turrets: four at the corners and two in the middle of the north and south faces. These turrets are topped by pepperpot roofs and have a decreasing diameter. The further away from the entrance of the castle, the more they have a large diameter, giving a massive appearance this modest building. Despite its rugged appearance given by the exclusive use of original sandstone is actually a ceremonial castle whose main function is to house the noble family. Its structure is made to impress but the thick walls (only 30 centimeters for turrets) accredits the residential function of the place. Few defense systems are present. There is moats that surrounded formerly in water partially tower and whose traces are still visible, the arrow slits in the basement and the presence of a stunner at the entrance of the castle. A fixed bridge composed the old entrance. Its overall appearance is very simple, without decorative concern, adding to its functionality. Located in the center of the village, in a valley, the fortified house was originally part of a typical set of castral average lordship of Artois with its high-courtyard with a garden and poultry- court composed of a farmhouse and light frames. The latter was completely destroyed in the nineteenth century.

How To Get To Donjon de Bours (Map):