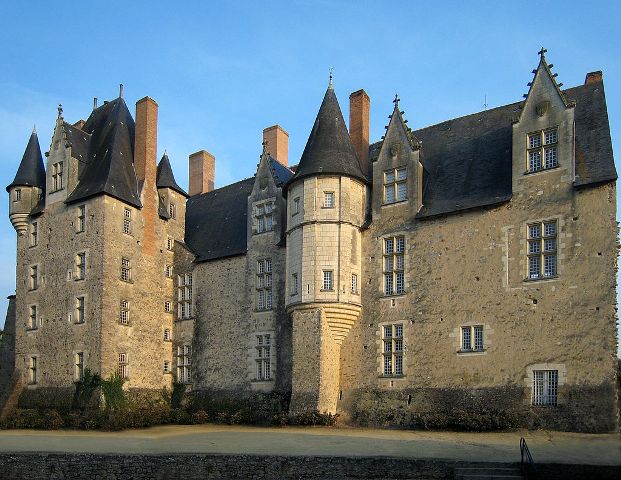 Location: Baugé-en-Anjou, in the Maine-et-Loire departement of France (Pays de la Loire Region).
Built: 15th century.
Condition: In good condition.
Ownership / Access: Owned by the municipality.
Notes: Château de Baugé is a monument of medieval times, which rises in the city of Baugé, the town of Baugé-en-Anjou in the department of Maine-et-Loire in the heart of Anjou. It dates from the fifteenth century and was built for King René, Duke of Anjou, great hunting enthusiast. Baugé Castle was built in the fifteenth century by King René of Anjou, to make his hunting lodge. Located in the city center close to the city of Anjou, it now houses the Museum of Art and History of Baugé and An exhibition about the life of King René. The first floor of this castle themes such as the dynasty of the Dukes of Anjou, Anjou and Europe, chivalry and tournaments, courtly love and the Cross of Anjou, later the Cross of Lorraine . In 1007, Fulk III Nerra, Count of Anjou, began construction of a fortress at the confluence of two rivers: the Couasnon and altree. This fortress is located on a rocky outcrop. This is a defensive and strategic site that has to face the possible attack of the Count of Blois, Fulk Nerra enemy. This presents hunting lodge halls of honor designed to accommodate the guests of King René. These rooms were serviced by a stone staircase, the central column is the starting point of a palm vault, unique in Anjou. Eight keys emblazoned arch depicting the coat of arms of Anjou, the star of Jerusalem, the coat of arms of the Kingdom of Aragon, currant leaves, initials RI which are those of King René and his wife Isabella, Duchess of Lorraine and Jeanne de Laval. An oratory, said King René, is illuminated by stained glass windows dating from the nineteenth century. The castle is built of rubble limestone and sandstone, covered with plaster and sand lime. For facades and staircase tower, its roofs and several interior elements (oratory parts located to the east, library and some attic rooms), the Chateau de Baugé is classified as historical monuments by order of April 13, 1961 . Since 2011, the private room of King Rene (with its reconstructed furniture: bed canopy, seat, cathedra, lectern, bookcase) and his oratory are accessible.