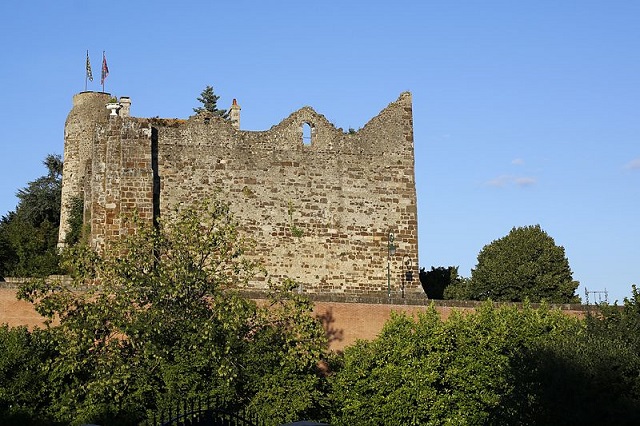 Location: Beaumont-sur-Sarthe, in the Loire-Atlantique departement of France (Pays de la Loire Region).
Built: 11th century.
Condition: --.
Ownership / Access: Viscounts of Beaumont Commune of Beaumont-le-Vicomte.
Notes: The castle of Beaumont-sur-Sarthe is located in the town of Beaumont-sur-Sarthe, in the department of Sarthe, in Pays de la Loire region. This fortress was built between the eleventh and twelfth centuries. The precise date of its foundation has not been determined more precisely and remains, as it stands, debated. During this period, the "belmontese" castle, the "classical" Middle Ages, erected at the request of the local lords: the viscounts of Le Mans and Beaumont. The manor house is designed in stone and has a Romanesque architectural style. Since its founding, the castle has in turn been the subject of conflicts, invasions and partial destruction, especially during the Hundred Years War. On January 6, 1927, a ministerial decree gave the medieval castle of Beaumont-sur-Sarthe, the former residence of the Viscounts of Maine, an inscription on the list of historic monuments in France.The castle is built in a Romanesque architectural style and belongs to the group of the first dungeons conceived in carved stone and having a rectangular or square ground plan, like the Carmes castles in Beaugency, Loches, Courmenant, at Rouez-en-Champagne, or that of Saint-Jean at Nogent-le-Rotrou. Although only remnants remain, it is possible to restore its original aspect. The castle belmontais presented itself in the overall form of a rectangle, but irregular. It had an average length of about 33 meters and a width of 22 meters. The North facade developed on additional space of 2 meters compared to that of the South. Located overlooking the Sarthe, the masonry structures of the building developed at an approximate height of 30 meters, and their thickness varied between 2.50 and 3.30 meters, depending on their orientation, the thickest sections facing Paths to the site. The main part of the house, that is to say, the private dwellings of the lords of Beaumont and their families, were located in the upper section of the castle. The main building was provided with a fortified tower 6 meters in diameter and circular in shape. The purpose of this fortification was to watch for the city of Belmonte and its surroundings. In addition, the walls of the manor house were doubled by powerful buttresses evoking on the south-east and north-west corners. These foothills are made of "reddish" sandstone (local stone) and develop over a width of about 2 meters for a projection about 0.80 meters. Finally, situated on its eastern side, a bayle (or "baille") was deployed. This extension, which also served as an outpost, housed all the outbuildings of the castle, such as the commons and the stables.