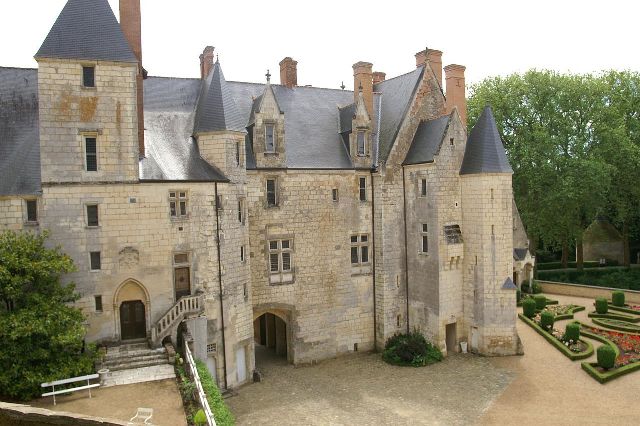 Location: Bessé-sur-Braye, in the Sarthe departement of France (Pays de la Loire Region).
Built: 14th-18th century.
Condition: In good condition.
Ownership / Access: Owned by the municipality.
ISMH Reference Number: PA00109687
Notes: Château de Courtanvaux is located in the town of Bessé-sur-Braye in the Sarthe.The first buildings date back to the fourteenth century when the Lords of Bessé are building a medieval manor intended to reassure the population and serve asylum in case of conflict. However, this has little strategic importance. It was not until a century later that Courtanvaux gaining scale. Thus, in the middle of the fifteenth century, Jacques Berziau, general secretary of the king, became the owner. It undertakes many work and enlarges the field with a chapel, a small castle, a dovecote and especially the main castle between 1450 and 1490. Castle Courtanvaux was never sold until it was purchased by the town in 1978. It is transmitted by inheritance or by marriage and three families have succeeded, landscaping the area constantly. The family is well Souvré owner of the place for years 1500 to 1661 and will bring the building a Renaissance touches, symbolized by the gate in 1582, listed building. Indeed, Gilles de Souvré, Marshal of France, governor of Touraine, Grand Master of the Guard Dress tutor of Henri IV and Louis XIII had built to this entry body. Henry has repeatedly stay in Courtanvaux. It Courtanvaux rises to the rank of marquis in honor of Gilles de Souvré. His descendants continue his work until marriage of his granddaughter Anne Souvré with François Michel Le Tellier, Marquis de Louvois and War Minister of Louis XIV. Upon the death of both spouses, heirs of the family Tellier lose interest Courtanvaux and remains uninhabited castle from 1691 to 1815. In 1780, Louise Charlotte Le Tellier, heiress wife Domain Count Pierre de Montesquiou-Fezensac. Under the Empire Montesquiou-Fezensac is grand chamberlain of France from 1809 and Louise Charlotte Le Tellier, called Mom Quiou is official nurse of the King of Rome. The couple retired to Courtanvaux after the fall of Napoleon in 1815 and began a complete restoration of buildings, in a marked Gothic style. Throughout the nineteenth century, the place will relive under the auspices also their son, Count Anatole de Montesquiou-Fezensac (1788-1878) deputy who is an orangery and stables (listed in the inventory of monuments historical). At his death he becomes the property of his eldest grand-son, Anatole Marie Odon de Montesquiou-Fezensac (1836-1882), who married the Romanian Princess Maria Bibesco (ro) (1845-1929) in 1867. on the death of her husband, the latter inherited the castle and at the turn of the nineteenth and twentieth centuries, amends the redecorating and completely modernized: forced air heating, indoor phone, kitchens, gas lighting .. . It was only death of the last owner, Pierre de Montesquiou-Fezensac in 1976 that the town of Bessé-sur-Braye bought the castle. It was listed as a historic monument June 11, 1980 while the entrance portal and two towers had already been filed on January 5, 1948. In addition the entire site was registered July 25, 1975.

How To Get To Château de Courtanvaux (Map):